We like alliteration. It’s usually pretty fun and catches your eye when reading. When we saw TaylorMade describe their P790 irons as packing powerful performance into a clean design, we tipped our hat to their marketing and copy team. We also knew from everything else that these clubs were worth a deeper dive.

For the true and dedicated fans of what we have going on here at UpBeatGolf, you know that we’ve already featured these clubs in a TaylorMade P790 review comparing them to the Ping i500 irons. Well, now you’re asking more about one of TaylorMade’s most popular models. And lucky for you, we have answers. If you want to learn more about one of the most dominant iron options for low to mid handicappers, it’s easy. All you have to do is scroll down and keep reading this TaylorMade P790 irons review.

Pros and Cons in our TaylorMade P790 Review

Launch angle is talked about in relation to driver distance more than any other club. Despite not coming up as frequently, it’s important for your longer irons. When you get to your 8-iron and lower, accuracy becomes more important. Plus, the launch angle is easier because of the increased loft. Basically, this is a feature focused on distance shots and hitting the green in regulation on lengthy par 3 and 4’s. 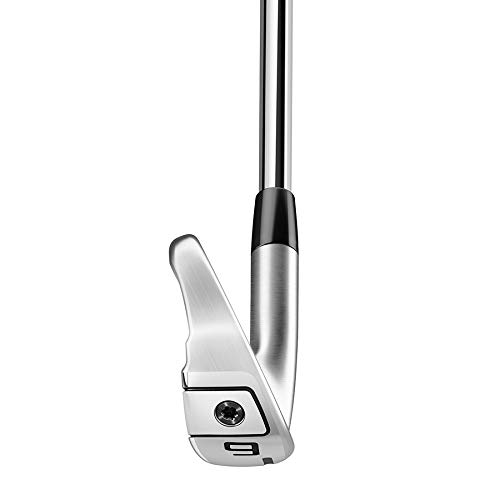 This is not the first generation of P790 irons. This is just the improved version. While the originals were popular, TaylorMade wanted to make them for a wider range of golfers. Their main solution was a greater focus on internal tungsten weights. This feature is responsible for shifting the center of gravity lower. With this improvement, you’ll skull fewer balls and hit more high, arcing shots that seem to track right towards the pin.

As if you needed more convincing, it looks nicer hitting the ball high and long compared to something that barely gets off the ground. From a practical standpoint, a shot that hits higher comes down at a steeper angle. Even without any help from spin, these shots will stop faster. This means going after corners of the green and clearing obstacles you would have otherwise had to go around. No more running the ball up while hoping to avoid greenside traps. Instead, you’ll be coming in from the air with better command and control.

Low weighting also contributes to the forgivability of these clubs. With the weight distribution of TaylorMade P790 irons, you’ll be able to use more of the clubface for good shots. In other words, you don’t need to hit the club perfectly square to maximize your distance, generate a good ball flight, and keep it going at your intended target.

Outside of changing how much surface area produces a good shot and making consistent contact, how else can you add distance? With the TaylorMade P790 irons, the answer is Speedfoam.

As you start to get closer to blades, Speedfoam becomes less common. With TaylorMade irons, the P790’s is one of the last sets with it. Rather than fill clubheads with heavier materials that only drag you (and your swing speed) down, TaylorMade looked for a better solution. Enter Speedfoam.

Speedfoam is a lightweight urethane foam that lives inside the clubhead, adding forgiveness and promoting faster swing speeds. We already knew that the TaylorMade P790 irons were good for distance, but this sweetens the pot. Lighter clubs, more speed, more distance.

By enlarging the clubhead while adding only minimal weight, responsiveness and feel are also elevated. Outside of the foam and tungsten weight, the head of each iron is hollow. With strong and durable materials wrapping the outside, you’re in it for the long haul with these irons. We do not condone hitting off cart paths and expecting everything to be okay, but a few scratches and dings won’t spell the end of elite performance.

What has become a staple of many TaylorMade irons is a fan favorite. Progressive inverted cone technology makes it easier to get the most out of each shot and makes occasional misses not quite as bad. Golfers don’t make golf clubs anymore. Physicists, scientists, and mathematicians do. If they happen to play golf, well that’s not entirely surprising and probably helps with their work. That’s their business though, not mine.

The face of each iron is different. At first glance, this might seem wrong, but your needs from each club also vary. By optimizing the shape and curvature of each iron, TaylorMade allows you to get the most out of each club. In adding flexibility to the clubface, it also expands the sweet spot. Another benefit, it increases COR.

This entire feature reduces side spin and increases accuracy. By eliminating side spin, you are more likely to keep the ball on the same flight path it begins on. While it cannot eliminate your slice or hook, it certainly helps out. If your ball is going straight and you’re missing greens, chances are it’s more of an alignment issue. At that point, you have the tools to fix your game and the clubs to do it.

Blades are difficult to play consistently with. Cavity back irons are easier to play with but offer less upside. TaylorMade P790 ironsTaylorMade P790 irons are between the two. These take the best pieces of each to create a great set of clubs for golfers in the middle of the skill spectrum. What it comes down to is that blade and cavity back irons each have benefits, but this set is a combination of the two. 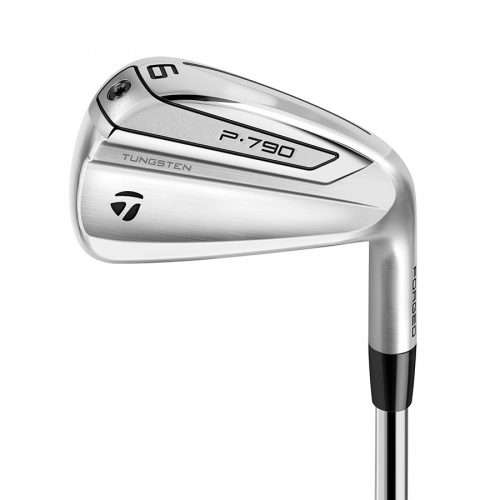 Why not blades or cavity back irons?

Now there is no standard handicap for when you should make the jump to blades or ditch the wide-flanged game improvements you got when you started. That’s where we stand, and user rt_charger on the Golf WRX forums agrees. Side note, it’s a great resource for gathering feedback from other like-minded golfers.

This is not to say skill level is the sole determiner of what type of clubs to use, but it should play a large role. By picking a set of clubs made for golfers of your skill level, you will get the most out of them. With these, you’ll be more in control of your game than with other options.

Before I get ahead of myself, there are several flexes that help account for swing speed disparity. However, these irons are at their best when used by golfers with swing speeds in the 90s, or close to that. If your swing is much slower or faster, you won’t be able to take full advantage of the low center of gravity and other benefits the P790s offer.

Giving an edge to the average player

When you shoot 85, you want to be shooting 75. The best way to do this is by increasing your likelihood of recovery after a bad shot. When you play using these irons, errant spin is reduced, but spin can also be controlled. Whether it’s a tight lie or a tricky pin, you’ll have an advantage over other types of clubs. With the added distance and ability to work the ball to your will, you’ll be on the fast track to catching up to your buddies that started playing 10 years before you.

When we do a full breakdown of a club, it’s because they are for a smaller group of golfers. This relative to most of the clubs we put in longer lists and guides. To breakdown who these clubs are for, we knew that a full TaylorMade P790 irons review was necessary. 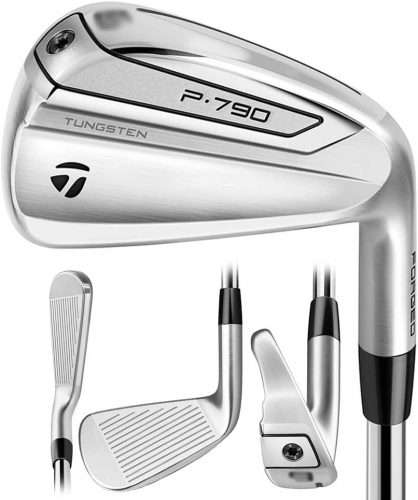 TaylorMade P790 irons are best for golfers with a handicap between 5 and 15. In other words, you don’t need to shoot even every time you play, but you should be able to get around the course playing bogey or better golf. With these in your bag, you should add a few yards with each club across the board. Also, these are a perfect blend for golfers that know what they want to do, but cannot execute every shot.

These irons are great for a player graduating from game improvement clubs. They’re also great for players who left game improvement clubs behind a long time ago but are not quite scratch golfers. Compared to game improvement irons, these are much easier to shape shots with. When it comes to blades, they do not have the same level of workability. To sum it all up in one sentence, TaylorMade P790 irons are forgiving, workable, and add a little distance to most golfers’ games.

In the words of Journey, “Any way you want it, that’s the way you need it”. We chose to do a TaylorMade P790 irons review because it is a set of clubs offered in a variety of ways. Left-handed or right-handed. Graphite or steel shaft preferred. Regular, stiff, or extra stiff flex. There are even a few different options for club composition. Back to Journey for a second—any way you want it. These aren’t one size fits all clubs. If you like this model, there’s nothing holding you back from choosing P790 irons.