Anyone who plays golf for any amount of time soon learns the value of making more putts. The short irons and wedges are called the scoring clubs, but in truth, that title should belong to the putter. It is nearly impossible to put together a great score without sinking some putts. Today we are giving you few putting tips that will help you improve your game.

What does it mean to putt well? Does it mean sinking bombs, or is just getting it into kick-in range on the first putt enough? The answer is, it is all of that. Watch the best putters at work. You’ll see that they scare the hole on the long ones, and sometimes those go in the cup. Even when they don’t sink it though, they usually leave an easy one coming back.

It is that last bit that makes the biggest difference in putting. The best putters seem to have a knack for leaving the ball in the best places from which to putt. They seem to have straight, uphill putts more often than the rest of us – and in truth, they do.

So, the first key to becoming a better putter is to be realistic. It’s nice to make a 12-footer, but getting those close every time (and on the correct side of the hole) will quickly shave strokes off your scores. Golf is a game of managing misses, and nowhere is that true than on the green. 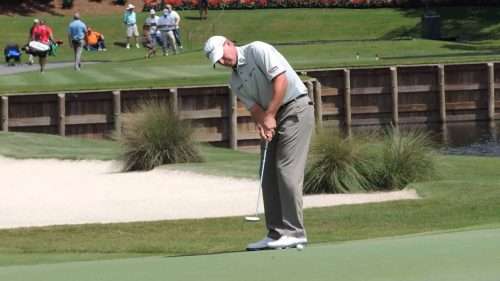 There are several factors that come into play when putting, and the golfer must get them all perfect in order to make a putt. Naturally, these factors become much easier to get right as the ball gets closer to the hole. But the main two factors never change: line and speed.

On a curving putt, the correct line is very much dependent on the chosen speed. Golf telecasts these days are very good at showing how line and speed work together (36-second mark in the link). The graphic shows two lines laid over the green, a more curved one and a straighter one. 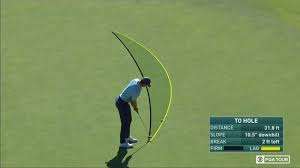 To keep the ball on the straighter line, the golfer must hit the ball harder. Otherwise the ball will peel off as gravity pulls it along the slope. Putting this way takes the break out of the putt. However, a miss on this line will send the ball well past the hole, leaving a tough comeback putt and risking a three-putt.

On any non-straight putt, there is a line the player can choose on which the ball will take the most break. This high line requires the softest touch, but the ball has a better chance of going in the hole. This line leaves the ball closer to the hole after a miss than the more-direct route.

Choosing the high line changes where the ball enters the cup. If the cup were a clock face and six o’clock was the bottom center, the ball will enter closer to eight o’clock on a left-to-right putt. Visualize a line on the green and the ball entering the cup dead center for that line. Learn to see that line and to feel the speed you need to hit the putt.

Jack Nicklaus was an avowed “die putter”. By that he meant that he always tried to choose the high line and get the ball to drop in the cup just as it was coming to a stop. When a putt loses momentum as it rolls to the cup this way, it effectively opens up the side doors.

Hit with proper speed, the ball will often curl into the cup when it catches the edge of the hole. Charging putts rarely ever lip in like that. When the ball is rolling slowly enough and it catches the lip, gravity will pull it into the hole. And even when it misses short, you’ll have a kick-in left.

Searching for advice on gripping the putter is like visiting a black hole. If you go there, you may never get out again. There are variations upon variations of the grip. None will inherently work better than any other style.

Most players start with a conventional grip, then make changes to it based on (usually years of) trial and error. Just check out these grips from many top pros of recent years. You should also be aware that some grip styles involve anchoring the putter, which has been banned by rule.

To grip the putter conventionally, place both thumbs along the top of the shaft. Most putter grips make this easy with their flat tops along the length of the grip. Placing the thumbs here will put the hands in direct opposition, so that the back of the top hand and the palm of the bottom hand both face the target.

Typically the forefinger of the bottom hand will overlap the ring and pinky fingers of the top hand. Gripping the club this way promotes a swing in which both hands work in unison. It minimizes moving parts and the variables they introduce. Alter those variables and anything can happen; eliminate them and very little can go wrong. 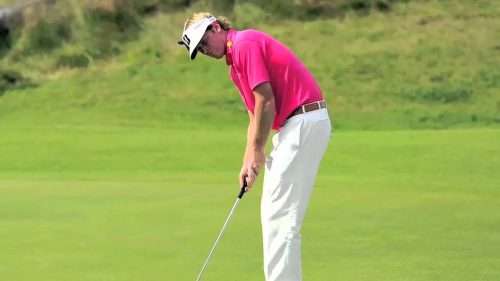 The placement of the ball in the stance – just the same as in the full swing – can make or break the resulting putt. Typically the ball goes forward of center, similar to its position for a mid-iron shot. The reason the ball goes there is because it helps the player to hit slightly up on the ball.

The bottom of the swing should be dead in the middle of the stance. Placing the ball farther up in the stance than that point helps promote a pendulum-type swing. Its back-through tempo has a one-two cadence that teachers talk about in their instruction – and good ball placement makes it all possible.

Essentially there are only two ways yet devised to swing the putter – two possible paths that it can take during the stroke. It does not really matter which one you choose. Use the one that feels best and that suits your eye. Whichever one you choose, though, stick with it. Much will depend on the path you take.

The first possible way to swing the putter is on a curved arc. On this swing path, the putter head appears to move around the golfer’s feet, to the inside going back and to the inside again after impact. Most golfers fall into this group.

Arced swings can be drastically circular or they can be much straighter. Much depends on how much the putter toe opens and closes during the swing. It is actually this movement of the toe during the stroke that causes the arc to occur.

Straight Back, Straight Through

The straight through putting stroke is far less common, though it is by no means wrong. There is no such thing as right or wrong in putting. The result is all that matters. Also, be aware that most straight-path swings actually arc a bit; they just feel straight to the golfer.

The putter head appears to go straight back along the intended line and continue along that line after impact. Golfers who use this stroke path tend to chase the ball with the putter head. The toe of the putter opens very little if at all in the back swing, meaning it does not need to close in the through swing.

At address, there is always some angle that exists in the wrists. The lead wrist will almost always be cupped to an extent, more or less depending on the player’s grip. The trailing wrist will have a mirror-image angle, though it may be at more or less of an angle.

Holding this angle throughout the stroke is a hallmark of great putters. It promotes a repeatable swing with predictable distances of roll. In truth there is a slight loading in the backswing and unloading through, but no hint of the flipping of the wrists that poor putters often exhibit.

Like the grip, there is no putter that is quantifiably better than any other putter at doing its job. In putting, we are simply rolling a ball along a mown surface. You could pull a log out of the woods and accomplish the same thing, but you likely wouldn’t prefer it to your favorite flat stick.

Personal preference is so important to putter style that it really cannot be overstated. Choose a putter that looks great to your eye, and you’ll likely do better with it than one that looks funny to you – regardless of what any expert will tell you. That said, there are differences that could make a difference.

When Nicklaus won the 1986 Masters Tournament with his now-famous MacGregor Response putter, sales of the new design went berserk. That putter was an oversized, perimeter-weighted design that is familiar to golfers now. At that time though, it was considered outlandish.

Modern putter designs are all over the place, but there are really only two main types – the classic blade style and the oversized mallet style. There is plenty of variation within those two divisions, but all putters will fall into one or the other classification.

Until recently blade-style putters had toe hang and mallet-style putters were balanced. There were very few exceptions. Several manufacturers are now making toe-hang mallets, and there are a few face-balanced blades as well. Base your choice on your putting style. 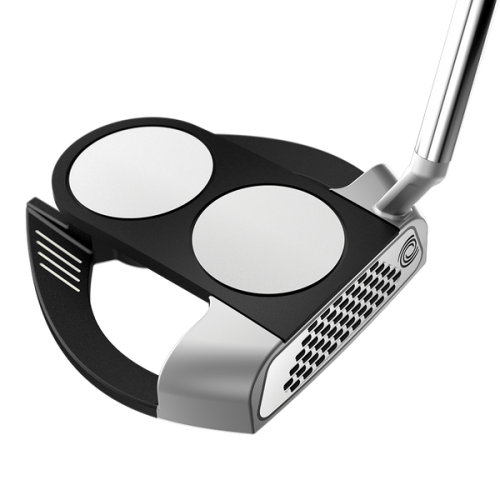 There are two ways of weighting a putter head. In one style, the putter head is weighted at the toe. In the other, the face is balanced. To tell which style you have, place the shaft along one of your index fingers at the point where the club balances. It will be close to the putter head.

On a toe-hang style, the toe of the putter head will point toward the ground. On face-balanced styles, the entire face will point directly to the sky. Golfers who use an arced swing will do better with a putter with some toe hang. A swing with more can accommodate more degrees of toe hang.

In contrast, golfers who use a straight back and through swing usually prefer a balanced face. If these players try to put a putter with too much toe hang in play, they will constantly fight the club’s tendency to roll open in the backswing and closed in the downswing. Toe hang promotes an arced path. 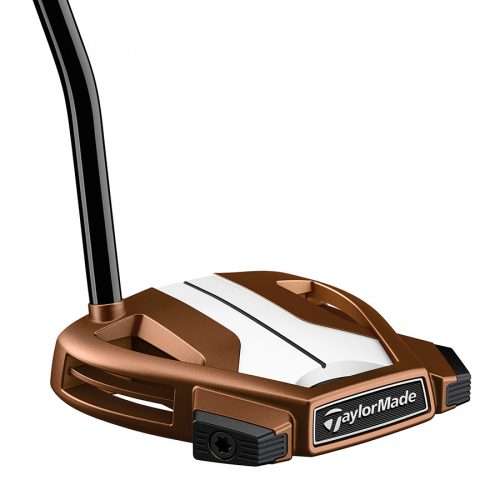 Get the Ball Rolling

When the ball first leaves the putter face, it has a tendency to skid for some time before it starts to roll forward. As this skidding is unpredictable, it makes it difficult to properly judge distance. It is therefore beneficial to minimize that skidding.

Manufacturers are now using inserts in putter faces that are designed to get the ball rolling sooner. Even if you elect not to buy into the hype of these putters, it is wise to work on imparting top spin. The easiest way to do that is to hit slightly up on the ball, much like the driver swing. 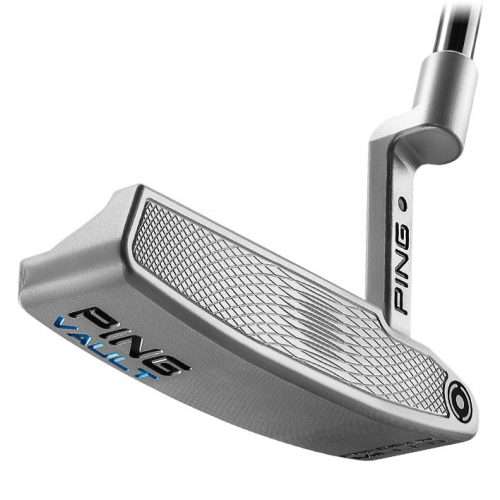 More so than any other facet of the game, putting is a personal endeavor. No two players do it exactly the same. Everyone feels something different when they putt, and the entire exercise is profoundly feel-oriented. Therefore, the best way to learn to putt is to do it – and do it a lot.

Still, there are some aspects of putting that are the same for everyone and for every putt. See the correct line and get the speed right for that line, and you’ll scare the hole. Putting like pro means taking the high line, which will help you prevent three-putts shoot lower scores.