Anyone looking for players’ irons has a wealth of options available. The same goes for anyone searching for game-improvement irons. But better players trying to add some yards have, until recently, been left wanting. Those players can do no better than investing in a set of Ping i500 irons – one of the best players distance irons ever.

The i500 is part of a new wave of irons in the golf world. These so-called players distance irons fill a niche between game improvement irons and true players irons.

What are Players Irons?

A true players iron will traditionally have a small clubhead. Very few players irons help minimize the poor results of a poorly struck shot. Rather, these clubs are made to be buttery smooth and to allow the player to work the ball.

Players irons also typically have much smaller sweet spots than game improvement irons do. They may have an unparalleled feel when hitting dead-center on the face, but they don’t respond well to even slightly mis-hit shots. 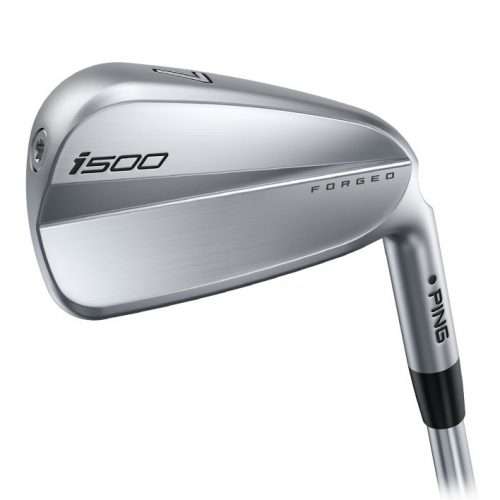 What are Game Improvement Irons?

Manufacturers make other irons for players who don’t find the center of the face on every shot. These are the game improvement irons. They often have a larger clubhead and perimeter weighting to enlarge the sweet spot and add forgiveness.

Game improvement irons are also known for distance. One way they achieve this distance is by using stronger lofts, so a 7 iron is more like the 8 iron from a players set. Another method for adding distance is by using a face that flexes on impact, much like a driver face does.

Better players don’t normally prefer the look of a game improvement iron. They tend to find them bulky and often boxy. They may hit them well, but the aids that help mid-handicappers hit it far and straight also keep better players from working the ball the way they like to.

Some manufacturers are making irons like the i500 that offer some of the benefits of a game improvement iron – specifically more distance – in the shape a better player usually prefers. The main audience is the better player who has lost distance, but other players are gravitating to these clubs because they offer a bridge between game improvement and players irons.

What Users are Saying

The Ping i500 irons are as well-received as they are popular. They hold a 4.6-star rating out of 56 reviews on several golf websites, the vast majority of which are 5 stars. Users praise the distance and the well-disguised help of the irons. Many boast distance gains of one to one and a half clubs.

The chief complaints center around build quality, which was admittedly spotty early in the i500’s production run. Ping has addressed those early issues, and the company has always been known to back its products. Other issues involve a perceived lack of consistency between clubs. As players irons, the i500 won’t provide much help if you miss the center of the clubface.

In every way, the Ping i500 is a stunning iron. The classic players iron has certain qualities that make it more attractive to a better player’s eye. These are the characteristics that we all associate with a players iron, whether we recognize them are not.

The typical game-improvement iron has as much as 5 mm of offset (for the 7 iron). Most players irons have less than 3 mm offset. The i500 fits into that category, with 2.3 mm offset on the 7 iron. So players get many of the benefits of game improvement irons without inducing problems.

Now, for a mid- to high handicapper, the offset can be very beneficial. Closing the face by 5 mm or more can help eliminate the wicked slice that wrecks games. But, for better players, adding offset can make it difficult or impossible to work the ball. At its worst offset can induce a hook, which better players tend to fight at some point in their playing lives.

The classic game-improvement iron had a glaring problem that kept better players from even considering them: bulk. All of those game-helping aids that engineers built into their clubs tend to add heft to the clubhead. Better players like their game improvement camouflaged.

The Ping i500 would be recognizable as a players iron in any era. It sits elegantly at address, simply begging to be swung. Part of the reason it looks right to a player’s eye is its thin top line. This characteristic, one which better players demand, was impossible to achieve with this level of distance improvement until recently.

The final piece of the puzzle in the look of a players iron is the one that is least visible at address. As opposed to the wide bottoms of game improvement irons, players irons normally have thin soles. The thinner sole helps minimize turf contact to aid in working the ball and producing different shots. It can, however, cause digging issues for players with steep swings.

The main audience for the Ping i500 is the better player who, whether from aging or some other reason, has lost distance. To get that distance back, the club utilizes the trampoline effect. This is the same bounce one feels on a well-struck driver or fairway wood shot.

Technically speaking, the trampoline effect raises the club’s coefficient of restitution (source). All of that is just a fancy way of saying the face flexes. As it rebounds, it imparts extra energy into the ball, which increases exit velocity and distance of shots. In the i500, that benefit is profound but not obvious or remedial. 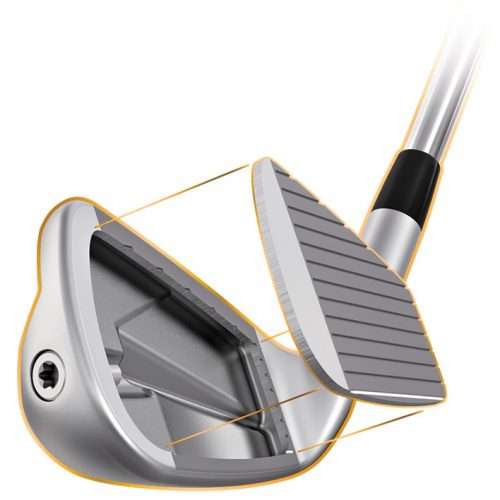 The face is the only part of the i500 that is forged. The body of the club head is cast from 17-4 stainless steel, which has high levels of hardness and corrosion resistance. What makes the i500 modern and different from previous generations of players irons is the hollow construction of the body.

The hollow clubhead makes the i500 play much the same way as a fairway wood or a hybrid. It just looks nothing like those clubs. But players can expect the same benefits – higher launch and better playability from a variety of lies.

Forging is not Ping’s thing. Ping’s players irons have always been popular, but rarely have they been forged. Forging provides the buttery feel for which players irons are known, but Ping has always managed to approximate it with cast irons.

Now, Ping has a forged club in its lineup, but it still gets to utilize its traditional casting process for the body. The result is something between the two types of clubheads. The feel is much improved over a solid, cast-steel iron, but it isn’t quite up to par with a solid forged blade. Of course, the compromise is all about adding distance, so players should expect some tradeoff.

After the USGA and R&A outlawed square grooves, the game’s equipment manufacturers began a scramble to prevent the dreaded flier. This dilemma occurs when striking the ball from deep rough. The moisture in the grass causes the ball to squirt from the lie, going much farther than the golfer expects.

What makes the flier even worse is that the player expects a shorter flight from the rough. To get the moisture out of the way, and to keep the flight as expected, Ping adds a microscopically rough finish (HydroPearl Chrome 2.0). The finish also gives the clubhead a pleasing and non-reflective satin finish. 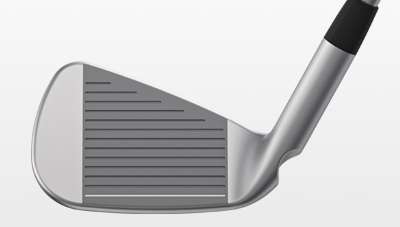 The weight savings from the hollow construction and thin face insert allowed Ping to get creative with the sweet spot. The engineers decided to use a tungsten weight to move the sweet spot closer to the toe.

Moving weight away from the hosel accomplishes two things. First, it increases the size of the sweet spot, reducing the negative effects of slightly off-center hits. It also helps the toe close during the swing, which promotes a draw. It isn’t a remedial effect, and it isn’t obvious.

The i500 also sports a muscle-back construction. This design places more mass low and behind the ball. The result is lower center of gravity, which helps get the ball up for higher launches. 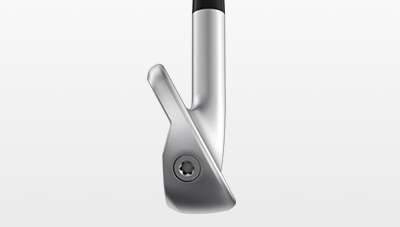 Compared to the average cost of game improvement irons, the Ping i500 irons can cause some potential buyers quite the case of sticker shock. They are easily a third more expensive than most cast irons, which may seem unrealistic to the average mid- to high handicapper.

In truth, though, the i500 prices are in keeping with other irons of their ilk. Compared with similar offerings from other top manufacturers, the i500s are not that expensive at all. Chalk the higher price up to higher quality materials and the added manufacturing cost of forging.

Irons with flexible faces are all the rage, and for good reason. They add miles per hour to the ball’s exit velocity, thereby adding distance. They do this without adding heft or size, so the irons tend to appeal to better players. But the mechanism for that distance (a thin face) is normally melded to a separate clubhead body, as is the case with the i500.

As is usually the case with adding pieces, the chances of them breaking goes up. Ping plasma welds the face of the i500 to the body. There are always going to be variances in manufacturing clubs like this, so the occasional weld failure is inevitable. As mentioned, Ping always backs its equipment, but clubs this expensive should be heirlooms.

The face of the i500 irons has that sweet, soft, buttery feel one would expect from a forged club. Shots struck on the center of the face have zero harshnesses. They even feel good if you’re off by a millimeter or two. But there is an element of forged clubs that is missing: the sound.

Some users complain of a clicky sound at impact, but that is likely more a result of slightly off-center strikes. When well-struck, the i500 has more of a crack, similar to the sound of a major leaguer striking a baseball purely with a wooden bat. The soft thud a players-iron user might expect is absent. The i500 has a sweet sound on its own – at least on pure strikes.

The Ping i500 may not be the perfect iron for everyone. Players seeking high levels of help from their irons should look elsewhere. These clubs are also a no-go for anyone on a shoestring budget. They are beautiful, precision-crafted tools, which carry the price tag that one would expect of this type of club.

If you are in the market for a club like the i500, you likely fit into one of two categories. You’re either an older player seeking to regain some distance or one who is new to the sport but with a rapidly improving handicap. For either of these groups, the i500 should make an ideal iron set.

Long without being remedial, with the look and feel of a buttery smooth players iron, these clubs offer sneaky assistance. No one will know where you got your newfound distance.