Callaway Epic Flash hybrid reviews have led to a lot of hype surrounding this club, but it earns its reputation. Stupid long and seriously forgiving, it deserves a spot in a mid-handicapper’s bag. But its playability makes it a reasonable choice even for the scratch player. Let’s see why.

We ask a lot of our hybrids. For a club that just a generation ago was unheard of, the hybrid has taken on more than its fair share of duties. It is driving iron, a rescue club and a long iron replacement. Asking more of a hybrid just seems, well, unfair.

Yet, in the modern game a hybrid must increasingly do the job that fairway metals once did. No, this isn’t going to replace your 3 wood (though another Callaway hybrid might). Modern players are treating their hybrids more like a 5 or a 7 wood. In it for distance and pillowy landings. That’s where the Callaway Epic Flash Hybrid shines. 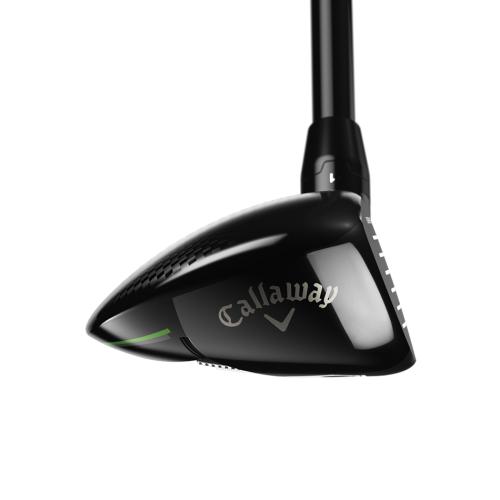 What Other Players Say

Read a few Callaway Epic Flash hybrid reviews and you’ll soon get a handle on this club’s popularity. When it first hit the market, there were legitimate questions about whether this club would be successful. Those questions revolved around its price point though, which, as we shall see, is an issue Callaway saw fit to address.

On Callaway’s own website, the Epic Flash hybrid owns a full 5-star rating. Likewise on Dick’s Sporting Goods’ site (out of 20 reviews) and on Golf Galaxy. Everywhere you look, people seem to be raving about the Callaway Epic Flash hybrid. The reason: It works.

One of the reasons drivers have historically carried the ball much farther than the other clubs is because of face flex. The large, thin faces on drivers have a trampoline effect. They spring the ball forward and give back more of the energy from the hit. We call this a high coefficient of restitution (COR).

Manufacturers long ago learned to miniaturize that technology for fairway woods. It took some doing, though, to make a hybrid’s face flex. Callaway calls its solution, first used in the Apex hybrids, Face Cup technology.

With Face Cup, Callaway welds a cup-shaped face to the body. The Cup Face is thinner around the edges, promoting a rebound-inducing flex. Callaway forges the Epic Flash hybrid face from strong carpenter steel for feel and long life.

The sound this club makes, thanks to the face design, is reminiscent of a fairway wood. It doesn’t match it exactly, but you can hear the staccato “pink” sound on impact. It is a more subdued sound and definitely not overly loud, but it’s a matter of taste (or of acquiring it). 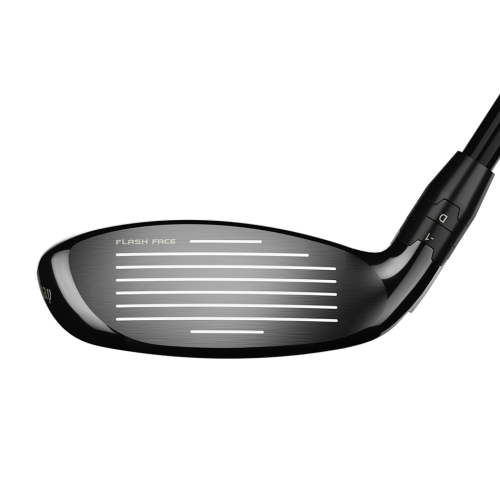 Forgiveness in a golf club is testament to its designers’ ability to position weight precisely. More to the point, it is a matter of achieving a stable club at impact. The more the clubhead twists on imperfect strikes, the lower the club’s moment of inertia (MOI) is likely to be.

Read the Callaway Epic Flash Hybrid reviews and you’ll discover that its high MOI is not magic. It is a result of careful engineering and materials selection. In this case, the main contributor is the ultralight crown material.

For the crown in the Epic Flash, Callaway chose to use a T2C triaxial carbon fiber composite. The graphite strands in this super-strong material are woven along three axes. They are therefore equally strong when stressed in any direction. Typical biaxial-weave carbon fiber only achieves maximal strength in the two directions of its carbon strands.

The strength of the carbon fiber counts for playability, but it is its lightness that gives the Callaway Epic Flash hybrid its forgiveness. Using carbon fiber for the crown allows the manufacturer to distribute that saved weight to other places in the clubhead.

Thanks to modern computer-aided design, Callaway was able to relocate that weight precisely where it is needed to boost MOI. The result is one of the most forgiving hybrids yet made. 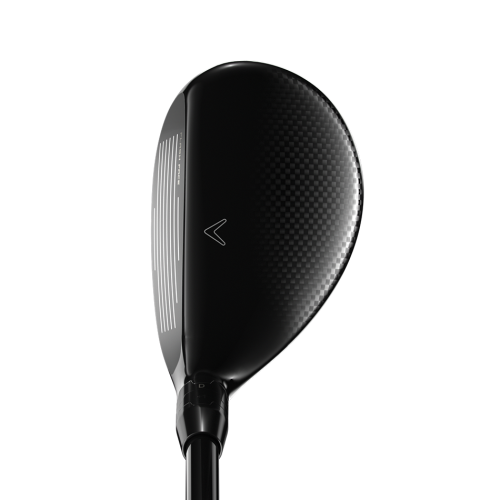 High MOI can often mean the opposite of workability. Better players tend to avoid these clubs because they prefer to work the ball left and right as needed. One of the oldest axioms in golf is that the straight shot is the hardest to hit, whether it’s true or not.

The thing is when a golf club is engineered with an abundance of forgiveness, it often makes it difficult to turn the ball. These clubs tend to be oversize and to look redial at address. They resist curved shots as much because of heft and size than any other factor.

A high MOI does not in itself prevent us from working the ball, and this club is the proof. In Callaway Epic Flash hybrid reviews, users rave about its workability. And that ability to curve it isn’t a result of small size. The Epic Flash hybrid is one of the larger hybrids now available.

No, in this case, workability is more a function of turf interaction and club weighting. The ball goes where you point it, so an altered setup results in predictable ball flight changes. There is no need to manipulate the club or help the ball up, hence a workable golf club. 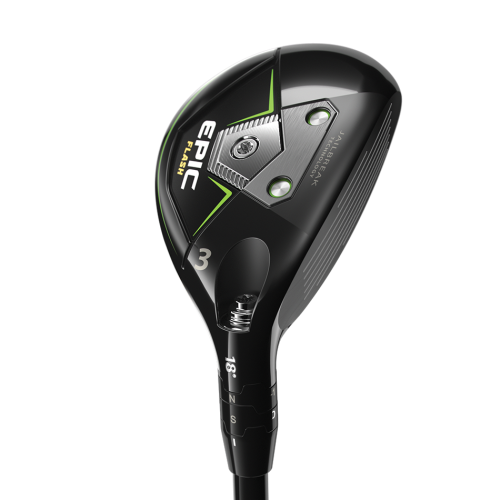 The brass at Callaway gave their engineers plenty of room to roam when designing the Jailbreak system. Those engineers then discovered that bracing the crown and sole allows the face to absorb more energy at impact. The face can then transfer more energy during rebound.

Callaway now uses the internal Jailbreak bears on all of its new clubs. It has become standard equipment on all Callaway drivers, fairway woods and hybrids, but it still bears mentioning. Jailbreak is ubiquitous among the brand’s lineup because it works.

We’ve mentioned the Jailbreak bars before because they are an impressive feat. Initially an accident of engineering, Jailbreak hints at better things to come in the future as artificial intelligence creeps into golf club design.

When it was introduced, Callaway was asking three Benjamins for this club. That is as much as a lot of people pay for a driver. It is a lot to ask even for a fairway wood, but this is a hybrid we’re talking about? How could it be worth it?

Well, there is no way around the cost of quality materials and engineering, for one. Also, consider the premium shaft (see below). Lastly, this club just works well, simply put. When you find a club you can use from the tee, the fairway and the rough, it’s hard to put a price on that.

Of course, Callaway did put a price on it, and it was enough to cause frugal golfers to either hang on to their existing hybrids or look elsewhere. Luckily the manufacturer has seen fit to drop the price to affordable levels. So, if you were looking at this club a year ago and you’re reconsidering, now’s the time.

Graphite shafts like those from Mitsubishi tend to add a premium onto the cost of a golf club. But manufacturer’s stock shafts often cause players to make minute swing adjustments to hit them well. Sprinkled throughout a bag, these micro-adjustments can wreak havoc on a round of golf.

Utilizing a popular aftermarket shaft is a neat trick, and it’s one that Callaway pulls often. In this case, the maker includes a Mitsubishi Tensei AV Silver shaft. These shafts use aluminum vapor to coat the butt end in an effort to improve stability. They have lower torque than the company’s CK Series shafts.

The carbon fiber has a tighter, thinner weave to prevent ovaling. Bending out of shape like that (ovaling) is one reason cheap shafts can be whippy and lack feel. The lower torque of the AV shafts make them play more like metal iron shafts – the perfect transition from irons to metalwoods.

It is a subjective issue. Whether or not being larger than the average hybrid is a problem or not will depend on the player. More to the point, it will intend on what the player is looking for in a hybrid. If you want an iron-like club to seamlessly replace your long iron, well, this might not be it.

However, if you are interested in a wood-like hybrid that has the distance to match its appearance, you may be in business. The face is hot and trajectory piercing. That last part owes much to the lower-torque shaft, so trajectory can be lifted by using a softer flex.

Callaway Epic Flash hybrid reviews usually mention its size because it is noticeable. But once in play, it soon becomes much less of an issue. It isn’t grossly oversized, and its heft suits its purpose. At address, it just looks like you are about to belt one out there, and that is always a good swing thought. 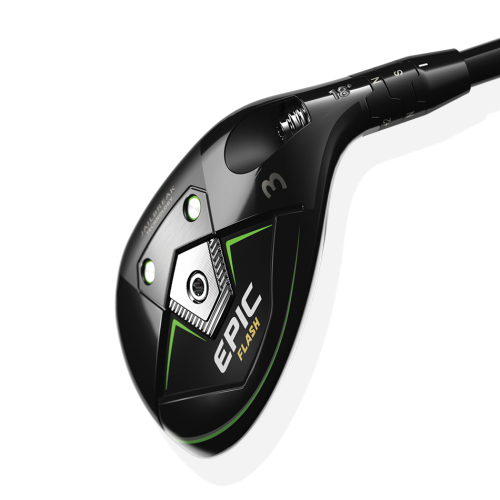 Not to harp on this one, but there really isn’t much else to fault with theCallaway Epic Flash hybrid. Some people hate the sound, and some people say they’ve grown used to it. You’ll rarely find anyone who loves the metal-centric sound this club makes.

The problem really is that the club lacks feedback, only in the sense that every shot feels flushed. Let’s face it though, no one flushes every shot. None of us is Iron Byron. A shot off center should feel off center. When it doesn’t, cognitive dissonance happens.

The truth is better players prefer that feedback from their clubs. It tells them instantly that the last swing was off somehow. If everything feels flush, they are practicing the wrong thing. For average players and high handicappers, that lack of feedback also means a lack of buzzing in the fingers on mis-hits. When is that ever a bad thing?

Yes, we all ask too much of our clubs at times. Whether it is stretching a lob wedge when a sand wedge would suffice or hitting an ill-advised driver off the deck, we all do it. But that is precisely the job of a modern hybrid. It’s a rescue club, a driving club and a sometimes-chipper. Oh yeah, and it needs to land the ball like a butterfly on a long par 3.

Not many clubs can do all of that well. Most hybrids accel at one aspect of their job, but fail miserably at others. The Callaway Epic Flash hybrid is an exception, and in that, it is exceptional. Carrying all of the technology its maker could fit into a package this small, this club does it all, does it well, then asks for more. They call that “game” in some circles.