For the improving golfer, the easiest and simplest way to get better is to use better clubs. Our pick for the best women’s golf clubs (intermediate player) is the Cobra F-MAX Superlite complete set. It provides the discerning player with quality, high-performing clubs in a ready-to-play set.

When we start playing golf, the clubs we choose to play make little difference. We improve in leaps and bounds, regardless of the clubs in our bags. Those big improvements get smaller over time though. One of the great joys in the game of golf is in watching your handicap creep downward. You’ve been practicing regularly and playing often, and your scores are dropping as a result (and a reward).

Now it’s time to take the next step in your progression. 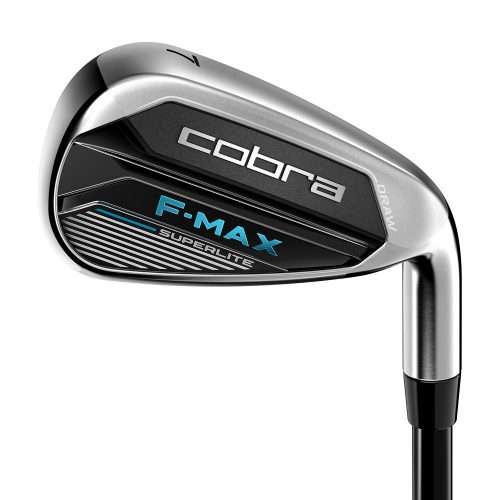 The Cobra F-MAX Superlite complete set is for mid-handicap women players who want to gain some distance. It utilizes proven club designs from Cobra’s popular F-MAX line and combines them with lightweight graphite shafts and grips. The result in most cases for most players is instantly faster swing speeds throughout the set and naturally resulting longer shots.

This set has few rivals among the best women’s golf clubs for intermediate players. The metalwoods and irons are the same F-MAX Superlite clubs Cobra sells individually. They’re just a bit more affordable as a set. From the Lamkin grips to the thin, playable iron soles, these clubs ooze quality. 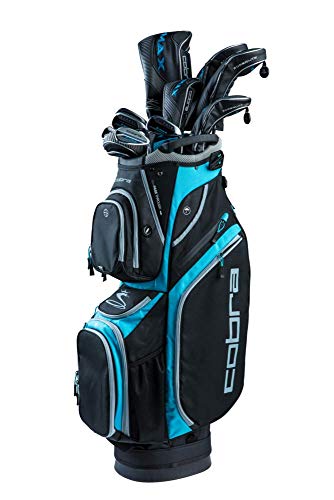 One of the givens purchasing a complete club set is that there will be club upgrades to make later. Typically, the driver is the first to go, and the other metalwoods (3, 5 and 7 woods and 5 hybrid here) soon follow. That simply is not the case with Cobra’s F-Max Superlite club set. Most players will not need to replace these clubs until they wear out.

The F-Max driver is the same one that Cobra sells individually. It is just 287 grams (18 grams lighter than the regular F-Max) and has a slight offset to correct slices. The E9 face forged titanium with variable thicknesses to boost the spring-like effect. This is a top-tier driver.

Cobra saw fit to include the Superlite versions of the 3 wood (19 degrees), 5 wood (23 degrees), 7 wood (27 degrees) and 5 hybrid (25 degrees). Experienced golfers should find these clubs easy to hit, yet workable.

The F-Max Superlite irons are the lightest and most forgiving in Cobra’s stable (check out this video). They combine lightweight clubheads, shafts and grips to deliver a balanced club feel.

The irons run from 6 iron (28 degrees) through sand wedge (55 degrees). The F-MAX wedges resemble the irons at address but are not cavity-back. Better players typically prefer more focused wedges, but it isn’t a requirement here. These dogs will hunt.

Otherwise, this iron set should be just what the doctor ordered to start shaving handicap strokes. Cobra F-Max Superlite irons are designed specifically for golfers with slower swings. Their progressive hosel lengths lower the CGI in the longer irons to help lift the ball, and they have plenty of forgiveness. The progressive offset may even help you draw tee shots for a bit of run. 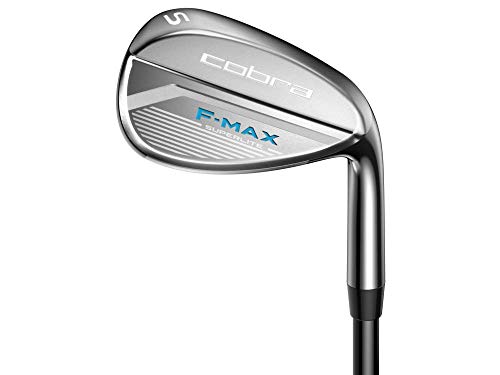 One thing that can be hard to impress upon a new golfer is the importance of having a quality bag. Your bag is more than just a place to store your clubs. It helps you stay organized and play proficiently.

Your bag will see plenty of abuse as it protects you equipment. Heck it is your equipment. This cart bag has a 14-way top to keep clubs separated and safe. It also has nine pockets to keep your gear and valuables stowed away neatly. It may be the last golf bag you ever own.

Drawback–Offset May Be Overly Remedial for Some

Some clubs have a face that is closed at address relative to the hosel, a feature we call offset. Manufacturers use offset to help prevent a slice, and it can work miracles. Unfortunately, not all players need such intervention.

As an improving player, you should have found your slice disappearing on its own, especially with the scoring clubs. Cobra F-Max Superlite irons have a progressive offset, so the faces of the long irons are more closed than those of the scoring clubs. There is some degree of offset throughout the set.

Most club sets in this category will have offset, and the F-Max has less of it than most others. How much of a drawback the offset is will depend on each player. It can be a boon for slicers. However, for players who draw the ball, it can sometimes introduce a hook.

Do be clear, this is the only real drawback of the Cobra F-Max Superlite complete set. Cobra is not a putter-making company, so it stands to reason that the flat stick would be lacking here, and it is. It will do the job, but it’s really a throwaway.

TaylorMade is an industry leader in club design, and its experience shows in the TaylorMade Kalea complete set. Designed specifically for the intermediate player, this is a set that will require little if any club swapping. It is ready to rip from day one.

With styling that could be generously labeled feminine, the Kalea set may not be everyone’s favorite to look at. But you can’t fault the club design and execution. Everything works as a better player would want, from the high quality graphite shafts to the top-notch putter. 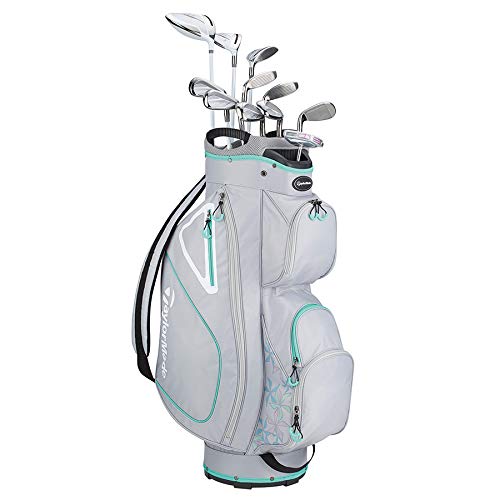 TaylorMade saw fit to include a legitimate version of its Spider Mini putter in the Kalea set, and it is really a standout. Not just any old mallet, Spider putters have been a mainstay on both the PGA and LPGA tours for years. Stability is key here, aided by the extreme perimeter weighting.

The Pure Roll face insert may not provide a feel that everyone prefers, but such a material really does not exist. The grooves in the face get the ball rolling sooner than a smooth face can, eliminating the iffy reactions as the ball skips along the first few feet of the putt.

At 33 inches, the Spider Mini putter will suit shorter women better than a standard-length one will. Taller women may need to swap it, but otherwise this club should remain in most players’ bags for as long as they own the set. Some may even keep it longer. It really does belong among the best women’s golf clubs for the intermediate player. 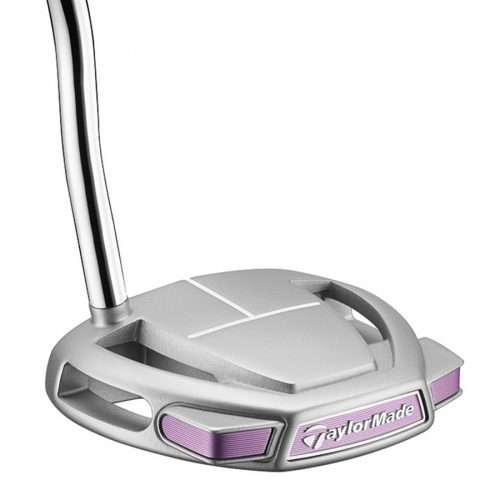 One thing about the Kalea set is that there is not really a huge negative to be found. The metalwoods are all playable. They include a driver (12 degrees), 3 wood (17 degrees) and 5 wood (20 degrees). There are also a 5 hybrid (26 degrees) and 6 hybrid (30 degrees).

The irons are elegant, if a bit simple and dated. The lowest loft is the 7 iron (33 degrees), and they run through the sand wedge (55 degrees). An undercut channel below the cavity back allows for some flex low on the face to boost ball speed on thinner contact, where many slow swingers hit the ball.

You’ll notice that, unlike the Cobra set, there are two hybrid clubs here. Normally that would be a good thing for moderate swing speeds, but including a 6 hybrid is a curious choice. Many players will benefit from its ease of play, but lower handicappers may balk at the unneeded help.

Ditto for starting the irons at the 7 iron. When playing from the rough, certain players may appreciate the 6 hybrid, but otherwise most better players hit a 6 iron plenty good enough.

Style is, of course, subjective. One person’s art is another’s trash, so it is not fair to pick on the Kalea clubs’ styling cues. It also isn’t honest to ignore them. The stylized flowers and the bright colors are something that rings of outdated sentiment.

This is also not something that Cobra’s F-MAX suffers from. That set can stand next to a men’s club set without screaming out that it is any different. It looks professional and understated. The TaylorMade Kalea complete set fell out of our top spot based mainly on this issue.

The Callaway Sollaire complete set is comparable in most ways to its pricier competition among the best women’s golf clubs for intermediate players. It matches the more modern appearance of Cobra’s set with the set makeup of the Kalea set. There are still stylized flowers everywhere, but they’re quieter here.

The Solaire graphite shafts are not quite up to par with the Cobra F-MAX Superlite shafts, hence the lower price. There are other areas where the Solaire set lags a bit behind the competition. However, they are still plenty playable, and in truth most of the differences come down to preference. 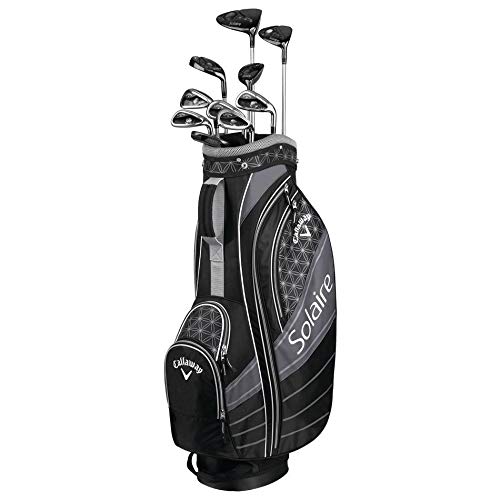 Anyone familiar with the Callaway brand should know to expect quality from that maker. There are no surprises here. Callaway showed the Solaire set all the attention to detail it does its men’s clubs, and it shows. These beauties should last for years.

Like the TaylorMade Kalea set, the Callaway Sollaire complete set opts for a 6 hybrid and starts the irons at the 7 iron. Better players may or may not long for a longer iron, but they will definitely miss a 5 wood. Jumping from a 5 hybrid to a 3 wood leaves a distance gap.

Our swings are too idiosyncratic for the perfect club set to exist. No manufacturer has achieved perfection yet, but the Cobra F-Max Superlite comes pretty darn close. Basically, Cobra just put together the individual components of a better-player’s set and assembled them in a package that is arguably the best women’s golf club for an intermediate player.

Sure, upgrades will be necessary, as they always are with complete club sets. But once you swap the putter (probably for your existing one) and install a couple of good scoring wedges, you’ll have everything you need to shoot better scores. Golf is more fun when our good swings are rewarded and our bad swings forgiven. Those benefits come sooner when we start playing the game with decent equipment.