The best motorized golf push cart might change the game of golf. When the modern generation of push carts arrived on the golf scene, it changed the way many of us play golf. Suddenly there was a healthy middle ground between shouldering your clubs or riding. Now there’s a new kid on the golf-cart block.

Motorized push carts are a natural evolution in a product line that can seem like a splurge to many players. But they can also be an investment in your health. Our top pick – the Bag Boy Quad Navigator– can make walking the course possible for some players and less of a drag for the rest of us. 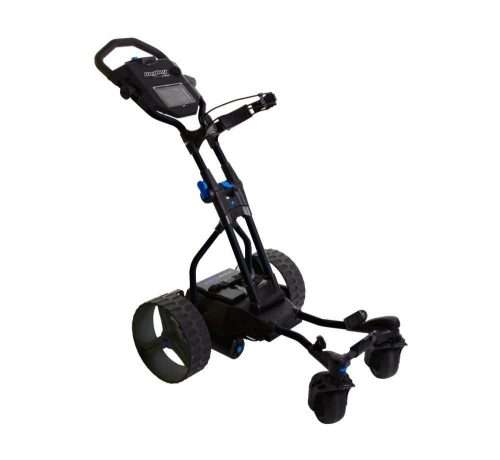 The Bag Boy brand dates back to 1946. Specializing in the design and manufacture of push carts, the brand enjoys a solid reputation for producing quality carts. The Bag Boy Quad Navigator is the company’s largest entry into the electric golf cart segment and our pick for best motorized golf push cart.

The Quad Navigator is powered by a heavy-duty, 12 volt, 26 amp lithium battery. That powerful battery is needed to drive the Quad Navigator’s dual 230-watt motors. Each of those motors in turn powers its own axle (left and right). The power comes on smoothly, with no jerkiness or weakness.

For safer operation on hilly terrain, the Quad Navigator features a retractable fifth wheel (located center rear), which relies on an inboard gyroscope. When the system detects a possible tip over, it deploys the rear wheel, which extends to catch the cart. It’s a smarter system than most of the competition.

This electronic golf cart also features a full-color display, unusual in the niche. The display tracks battery life, speed setting and – importantly – yardage. There is also a remote control with an emergency stop button and a locking electronic brake. 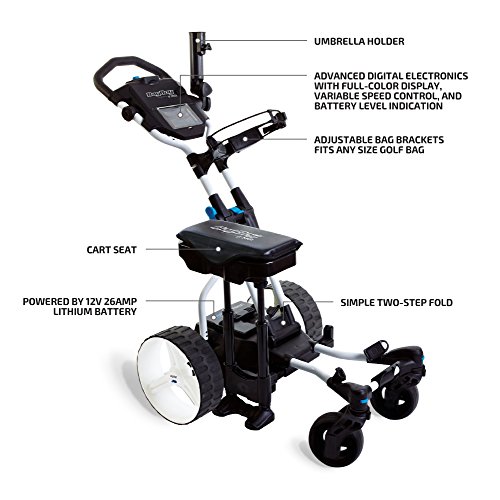 The electronic brake on the Bag Boy Quad Navigator deploys simply and powerfully. Atop the remote control are two buttons – Unlock and Lock. Simply pressing the Lock button enables the user to keep the unit in place where it was left.

The Unlock button must be pressed before the unit can move, which prevents accidental engagement of the motors. This is a thoughtful and simple-to-use braking system that players will utilize several times on every hole they play.

The fifth wheel on the Quad Navigator is an ingenious anti-tipping method. Deploying automatically, it does not depend on the user in any way.

Players in hilly areas will surely appreciate this feature, but even flat courses have elevation changes that make stability an issue.

The gyroscope that tells the Bag Boy Quad Navigator that it is tipping also tells the CPU if it is veering, and the unit compensates to straighten its course. That is some high-tech engineering, similar to what motorcycle rider aids are doing to make riding safer.

That the Bag Boy Quad Navigator includes a full-color display should not be anything special, but it is surprisingly rare. This brain for the system monitors battery life, so a player can swap it or head to the clubhouse as needed. Battery life will easily surpass a typical 18-hole round, but you never know.

The Bag Boy Quad Navigator is innovative in its ability to avoid tipping backwards. Few golf carts exhibit this level of foresight. It’s almost as if the product designers dealt with tipping in development and had to come up with a solution. Hey, wait…

The narrow space between the left and right rear wheels is a result of the required gearing for the electric motor. Placing the rear wheels farther apart would reduce their torque, either reducing power or requiring a more powerful motor. It’s just a shame that the skinny footprint introduces a left-to-right tipping potential.

The Stewart Golf brand is based in the south of England and is staffed and run by engineers. It builds its push carts and electronic carts by hand, one at a time. English manufacturing is noted for attention to detail, and the Stewart Golf X9 Follow is no exception.

Thanks to its innovative Bluetooth technology, the aptly named X9 Follow will actually follow a player around a course. No need to learn to be an RC master. You can leave the remote control in your pocket or in the spacious valuables compartment.

Of course, if you prefer you can still use the remote control. It has a range of 50 meters, so players need not be directly next to the X9 Follow for it to receive commands. The cart also has automatic downhill braking, and users can control the cart via handle controls in tight spaces.

The onboard lithium battery powers twin 190-watt motors, each powering one of the two rear wheels. The front wheels are passive and swivel 360 degrees. At just 30 pounds, the X9 Follow is neither light for the class. Spare batteries are available, and swaps are painless and quick. 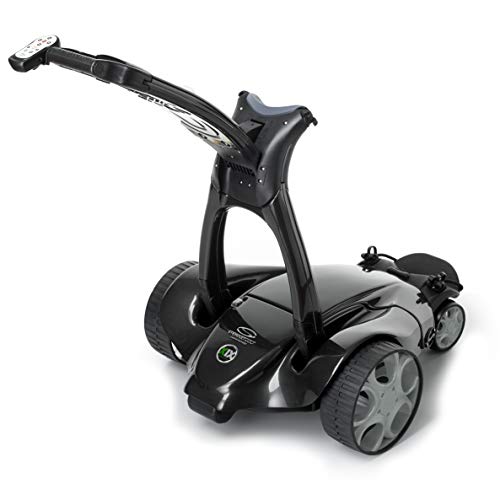 The X9 Follow features anti-tipping technology that makes it a great option on hilly terrain. The rear of the chassis will contact the ground well before the unit tips backward, keeping it upright. Because of its wide footprint, left-to-right tip overs are rare, if not impossible.

The chassis on the Stewart Golf X9 Follow might look as fragile as a sportbike fairing, but the unit is remarkably well-made. The body shell has as few pieces as possible and can take a shot, though most users won’t be abusing their investment. Connection points are solid and well-thought-out as well. There is nothing cheap about the X9 Follow.

While Stewart Golf certainly does not give away their batteries, the engineers put effort into making swaps as painless as possible. Users can pre-charge a spare and bring it with them to the course. That way there is no chance of being stranded on the far side of the course.

Expensive and affordable are relative terms, but there is no denying that the X9 Follow is one of the most expensive electric golf carts on the market. Users will certainly argue that they got what they paid for, but that cost is considerable. Still, with the reliability of the unit, the X9 Follow will be a one-time investment for most users.

The Stewart Golf X9 is innovative, that much is certain. However, the follow mode on the unit is a bit more touch-and-go than modern users should expect. Its sporadic functioning makes the feature seem rushed to market, though that definitely is not the case.

Some users never have an issue. For others, the sometimes failures to follow can be frustrating, being as the feature is a major selling point for the cart.

The CartTek GRi-975Li is a little different than the other entries on our list, and it shows. To begin with, it is considerably lighter and more lithe than most of its competition. It folds down smaller, weighs less and commands less attention on the course.

This cart’s smaller stature is partly due to CartTek’s use of strong, aircraft-grade aluminum for the frame. The tubes are a smaller dimension than even most push carts offer. In fact, it can be difficult to spot the differences between the GRi-975Li and a typical push cart.

CartTek was aiming for that inconspicuousness, which is why the engineers removed the battery altogether. Users can simply slide the external battery into a pocket on their golf bag. It plugs from their via a cable directly into the cart.

Rather than a remote control, the GRi-975Li uses a throttle on the handle. It remembers the last speed setting, so there’s no need for constant adjustment. Other than that the cart operates just like a push cart, albeit without the pushing. 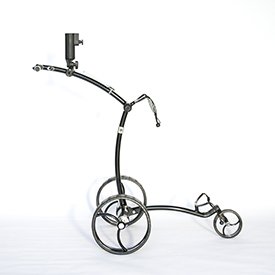 Battery Swaps are a Snap

Because it utilizes an external battery, using a second one is much less of an issue than on some others. The battery is meant to stow in a golf bag compartment, so they are small and lightweight. They can cost as much as a third of the cost of a new cart, however.

It should be obvious that the GRi-975Li is lighter than the remote control carts. Its aircraft-grade aluminum chassis is strong, but it is a much smaller diameter than most of the competition.

There are simply times in the course of a round where having a remote control pays off. It’s a little like the Lone Ranger calling for Silver. It can be a lot faster and less troublesome to have your clubs come to you, especially after leaving a green complex and heading the other direction to the next tee.

The Bat Caddy X4R is somewhat of a bargain compared to the other remote-control electric golf carts on this list. As always, though, bargains come with caveats. First, the good.

The X4R uses dual 200 watt motors to drive its rear wheels, with a 34 AH, 12 volt battery for power. The battery can last nearly two rounds when new and freshly charged.

The remote control can reach the cart from as much as 100 yards away, so bringing the cart to you should rarely be a problem.

The bad here includes a convoluted, almost impractical design and a homespun look. Wires poke out from the exposed battery, which looks like it was borrowed from a lawn mower. The stationary, non-swiveling front wheel is also curious. The X4R works well, it just feels like a prototype. 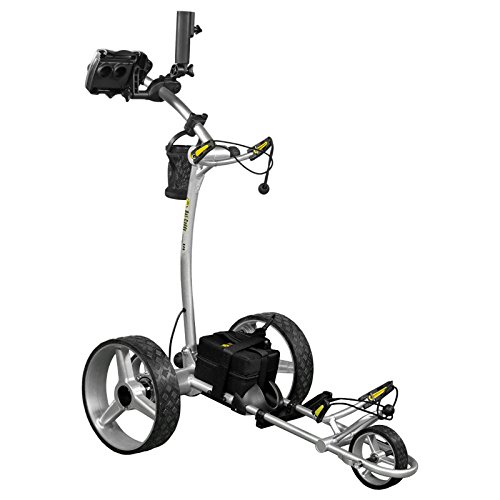 The Bat Caddy X4R is a much simpler machine than, say, the Stewart Golf X9 Follow. Its drivetrain and battery lie exposed, but there

Beauty is always subjective, but the design of the X4R certainly lacks the sophistication of the competition we list here. Its exposed battery and wires give the look of a garage project, as if its owner built it out of spare parts from various devices.

Other carts of this type have dual front wheels which swivel, often 360 degrees. This X4R on the other hand has single, fixed front wheel. In forward motion the cart turns just fine. Even at walking paces, sharp turns risk tip overs. But in tight spaces and when stationary, the lack of maneuverability here shows.

Prototypes are usually bulky, and the X4R certainly is that. Its battery weighs nearly what a Bag Boy Quad Navigator weighs in total (25 pounds to 34 pounds). However, the X4R can cost half as much and it gets the same job done. It just might leave a deeper track in the grass doing it.

There is starting to be a lot of competition in this area of golf cart design, and the manual push cart will likely become a thing of the past soon. Push carts simply drain more calories than these carts do, and that drain becomes evident on the last few holes of a round – maybe sooner on hot days or hilly courses.

The Bag Boy Quad Navigator gets our top pick for its lightweight maneuverability and ease of use. It functions flawlessly and can seamlessly integrate itself into anyone’s golf game. Its competition here are all excellent choices as well, though.

Incorporating an electric cart in your game can get you walking if you’re a rider and keep you fresh if you’re used to pushing a cart. It is a modern way to keep walking in the game, as it was always meant to be. Ride if you must, but walk when you can. It gives you time to appreciate the beauty of the course and your time on it.