The modern game has an answer to the whippy wooden shafts of yesteryear and the over-stiff steel shafts: graphite. The best graphite shafts for irons – like our top pick, the UST Mamiya Recoil ZT9 – load much better than steel, providing the power that many players (seniors and women especially) are missing. Traditionally that power came at the cost of ball control, but the times are changing.

The original golf shafts were made from hickory wood. These shafts had a whippy feel and a tendency to twist during the swing and at impact. However, they bent in the swing, storing energy and unloading it into the ball.

The advent of steel shafts changed the game. Gone was the whippy sensation, and the twisting – especially on off-center strikes – was much improved. While steel shafts provided much more stability than hickory, they do so at the cost of the loading that made hickory a mainstay. 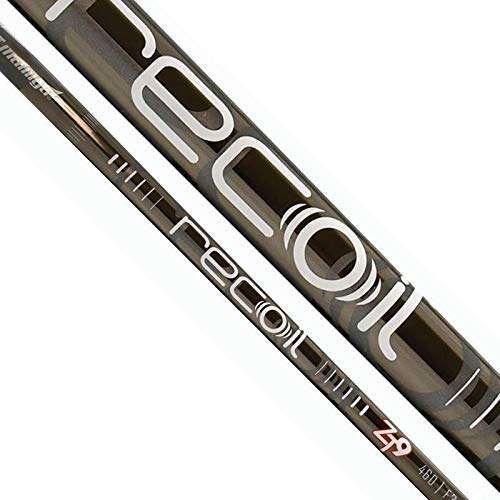 The UST Mamiya Recoil ZT9 is the newest tech from one of the most prolific makers of graphite shafts in the golf industry. The company’s driver, fairway metal and hybrid shafts grace the bags of players at every level of the game. Its iron shafts may be on the way to similar success.

The graphite and resin in the ZT9 provide a higher damping rate than the typical graphite shaft for irons. As a result, mis-hits and off-center strikes produce less vibration. So there’s less of the bumblebees-in-the-fingers sensation on poor hits.

In regular flex, ZT9 shafts weigh 69 grams uncut. With tapered-tips, the dynamic weight typically drops a little more than a gram per club. Irons fitted with ZT9s will feel lighter as they get shorter, but their tips will have consistent flex and launch angle throughout the set.

These are parallel-tip shafts, so they are sold in one length and are trimmed in .5-inch increments at the tips. The result is a flighted set, in which the tips have progressively more flex from short irons to long irons. So the longer irons tend to launch higher than the scoring clubs.

Higher-launching long irons may sound inconsistent, but the opposite is normally true. By design, flighted sets match their ascending launch angles to the clubheads’ descending lofts. The result is usually a set with a more consistent launch angle than with tapered tips.

Recoil ZT9 has 4 degrees of torque in the regular-flex shafts. Low-torque shafts like these are designed for better players. They don’t load very easily (though much easier than steel), reducing the feeling of whip but allowing the player to sense where the clubhead is in the swing.

The low torque value also represents resistance to twisting. Shaft choice always boils down to the benefit of flex (power) versus the drawback of high torque (twisting). A twisting clubface is difficult to square at impact. The Recoil ZT9 flexes plenty for most players, without introducing too much twisting.

Benefit – Light (but not too light)

At about 69 grams uncut, the Recoil ZT9 is neither too heavy nor too light for the average golfer. It is 50 grams or more lighter than the typical steel shaft, while still allowing the club to feel naturally weighted.

Lighter shafts tend to increase clubhead speed naturally, so players can expect a distance gain when switching to Recoil ZT9 shafts from steel. Below this weight (at 50 grams or so), torque can increase pretty dramatically, introducing a sensation of vagueness about clubhead location and orientation.

Graphite shafts that are much heavier than this 70-gram neighborhood are not really reaping all of the possible benefits of a switch to graphite from steel.

Rather than traditional painting, the folks at UST Mamiya utilize a state-of-the-art bonding process. The resulting finish adheres through a chemical ion bond to the graphite, producing a finish that is much tougher than paint.

Players who replace their clubs every season may scoff at the need for such measures, but the frugal golfer will relate. After just a few seasons of use (bending and bag chatter), the paint on graphite shafts tends to wear and chip. The ZT9 shafts will look newer for longer, period.

Fujikura has a well-earned reputation for tailoring its driver shafts to improve the performance of a wide swath of players. The same is true for the company’s graphite iron shafts. The Fujikura Vista Pro 50i is designed for the slowest of swings, but there a Vista Pro shafts for other players, too.

The Vista Pro 50i gets most of its swing benefits from its weight, which at 60 grams is lighter than most. Its low torque helps improve accuracy, while its flexible tip lifts launch angles for noticeably more carry. 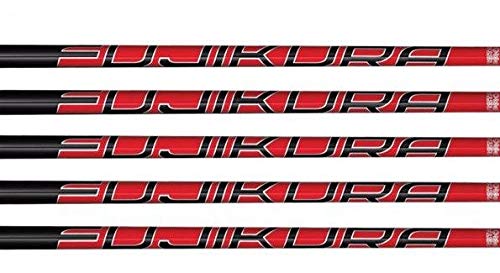 These parallel-tipped shafts have an impressively low torque value for their weight. At 3.9 degrees in its most flexible R3 flex, the clubhead never gets lost in the swing. Twisting during the transition is reduced, so dispersion is tighter.

One of the main issues with a slow swing is that it does not impart enough backspin on the golf ball. Players with fast swings and a low, boring trajectory will see a secondary lift of the ball as the backspin causes it to gain altitude. Slower swingers cannot achieve this lift.

Consequently, players with slow swings cannot get by with a low initial trajectory. That’s why Fujikura makes the Vista Pro 50i. At 60 grams, these shafts are practically guaranteed to increase clubhead speed, which increases backspin by default.

While the Fujikura is a great option for females and older men with slow swings but accurate ball striking, players with even average swing speeds should look elsewhere. These clubs are entirely too easy to load for 90 mph-plus swings. Fujikura has other shaft options for these players.

The Mitsubishi brand is famous for its TENSEI and Diamana driver and fairway metal shafts, but it has more to offer. The Mitsubishi Kuro Kage iron shafts are the company’s solution to those looking for more pop in their irons.

These parallel-tip irons offer a low-torque, lightweight solution to players of all ilks, but especially those who are starting to show the signs of age. We all lose mph in our swings as we get older. That was once a game-wrecking proposition, but thanks to shafts like the Kuro Kage, father time now must wait.

The addition of titanium nickel wire increases the strength and decreases the torque of the Mitsubishi Kuro Kage series. This combination allows the manufacturer to produce shafts that are much lighter than their torque values would have you believe.

The benefit here is that better players do not have to battle the vague feeling in the swing that can plague other lightweight shafts. The clubhead is always where it feels like it is. Yet, players reap the benefits of a lighter overall and dynamic club weight: more speed.

Players with very low swing speeds normally struggle to get the ball airborne, which is something they remedy through high torque shafts. Low kick points are another remedy. Both of these things can wreak havoc on better players’ games.

The Kuro Kage lineup is different. Torque is kept low and kick points toward the middle of the shaft. Better players with still-moderate swing speeds can recoup some lost distance without launching the ball into the stratosphere, which is especially damaging in the wind.

The Kuro Kage line is interesting and advanced, but it forces players into categories based on swing speed alone. All manufacturers do this, but there tends to be more overlap in weight categories to allow for preference. The choices here are predetermined and prescribed.

Better players and those with faster swings can still enjoy a performance boost when they make the switch to graphite. These players need less help in the form of flex, though. That’s why a shaft like the AeroTech SteelFiber exists.

These shafts utilize a continuous strand of steel to cover a central graphite core. This combination gives SteelFiber shafts some of the benefits of both steel and graphite shafts while eliminating some of the drawbacks of each. They are designed for better players, who usually prefer steel iron shafts. (Check out this video to see more benefits)

Players in this category can struggle with a feeling of vaguenss from graphite shafts. They often complain of losing a feel for where the clubhead is in the backswing. That problem is much less of an issue with the SteelFiber shafts than with normal graphite. The AeroTech SteelFiber is the  best high-end graphite shaft for irons. 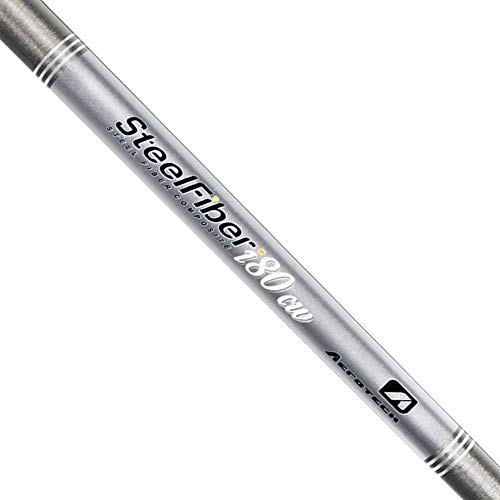 Thanks to their graphite cores, Aerotech SteelFiber shafts load easier than typical steel shafts. That loading stores energy, which is released into the ball during the strike. The result is that the clubhead strikes the ball with more power, as though the golfer had added swing speed.

The 90-degree hoop of steel strands provides incredible torsional strength. Aerotech SteelFiber shafts bend and load just like a normal shaft – whether steel or graphite. However, both of those other shaft types deform during the swing and at impact.

SteelFiber shafts hardly exhibit any deformation at all. They bend and load like a graphite shaft, but they deform much less than steel. This benefit gives SteelFiber shaft a much more stable feel at impact than either of the other two types of shaft.

The AeroTech SteelFiber shafts occupy a middle ground between graphite and steel that previously did not exist. They are more solid and deform less than the typical graphite shaft. But they also provide less of the power benefit that players with slower swing speeds are looking for.

Graphite shafts have long helped those among us with the slowest swings remain competitive. As distance has come to be a dominant factor in the enjoyment level of the game, these players could otherwise have been left behind. But graphite shafts are now improving the games of even the longer hitters.

Better players and those with 100 mph-plus driver swings can now reap the rewards of lighter graphite without introducing game-wrecking issues like club head twisting and ballooning shots. It’s a brand new era in the tailoring of our clubs to suit our games, rather than forcing us to alter our swings to fit our equipment.