If you’re in the market for an affordable beginner’s set of golf clubs, there are a couple things to understand from the top. First, you are necessarily going to be making compromises, regardless of the quality of the set. The Wilson Profile XD requires as much compromise as those expensive entry-level sets. It just leaves room afterward for you to actually afford to play golf.

The second to know is that you need a set that fits you. The Profile XD is intended for men of average height. The flex of the shafts is such that slower swingers will struggle with them, though they are by no means stiff. Taller players should opt for the Long version, which has shafts that are 1 inch longer (+1) than the regular set.

Wilson Profile XD – Are They for You?

Golf is a journey. Learning to play golf isn’t something that happens overnight. It is a process, and it’s one that is never complete. As you grow and as your game improves, the quality of your equipment can make a massive difference in your ability to pull off certain shots. At first, however, the golf clubs you choose to play will seldom make very much difference at all.

When taking up the game, all you really need is a decent starter set. The problem lies in finding a set of clubs that will survive long enough for you to replace them. Ideally, you’ll choose a set than you can play for a long time. But most people replace starter clubs one at a time (except for the irons, which come in sets).

The Wilson Profile XD complete set fits that bill perfectly. The set is bookended by a couple of truly lackluster efforts (the driver and putter), but most of the clubs in the middle are relatively well-executed. Some are quite impressive.

This is a set you can grow into as your game improves. Despite its modest, entry-level price, the Profile XD has much going for it. Every club in the bag is playable, some simply are more playable than others. Let’s look a little deeper.

The Wilson Profile XD set carries a 4.0-star (out of five stars) rating at the PGA Superstore and a 4.2-star rating on Wilson’s own website. We’ll dive into the details and explain what holds the set back from 5-star territory. For now, let it suffice to say that no starter set is perfect.

Each golfer is unique, and building a set that suits everyone has long been a challenge for the manufacturers who make these sets. Such is the nature of golf. While it is certainly not perfect, the Profile XD provides everything you need to get on the course. Toss some tees and balls into the included stand bag, and you’re ready for 18 holes.

A Word on Golf Sets

It is the very nature of a complete golf club set that it will require the user to make compromises. Regardless of cost, it is simply impossible to build a set that works perfectly for everyone. Still, a complete set is smart and easy way for a new player to enter the game.

Purchasing a new set of professional-quality clubs is out of most people’s reach. That is the appeal of the beginner’s set. The key is to find which clubs in the set work for your game, then replace the weak links one at a time. There are some pieces of the Profile XD that you may not want to replace at all, starting with the short clubs.

Let’s start with the clubs that the Profile XD gets right. The included irons are the 6 through 9. There is also the usual pitching wedge and a sand wedge for close approaches and for bunker shots. The irons are the best thing about this set, bar none. The heads are stainless steel (so no worries about rust), and they are fitted with steel shafts.

The wedges lack the heft and feel of a feel of professional-level offerings, but that’s not what these clubs are trying to be. Unlike a typical iron set, the pitching wedge is designed in the same manner as the sand wedge, rather than being simply a 10 iron. There are no noticeable gaps in the irons’ distances, except for a slight one between the sand a pitching wedges.

These irons have the usual perimeter weighting and cavity backs that increase MOI and result in a large sweet spot. As a beginner, forgiveness should be a priority in the clubs you select. The Profile XD irons allow for slightly off-center strikes, and their pronounced offset can all but cure that wicked slice. If you’re planning on replacing clubs as you go, the irons will be the last ones you kick out – if you ever do. 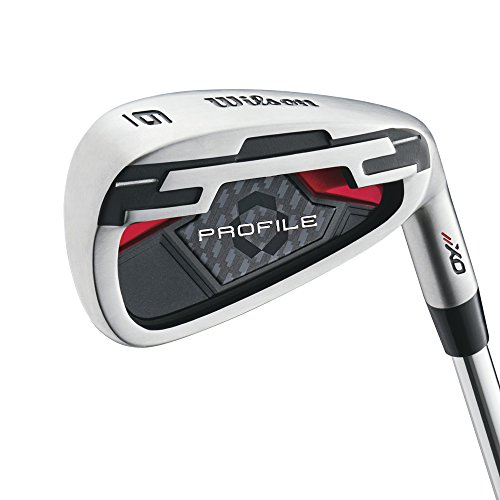 It’s important to note that the Profile XD includes a #5 fairway metal and #5 hybrid. Even though they are more often included in starter sets, beginners can seldom hit either a 3 wood or a 4 hybrid well. Including these more-lofted offerings in this set better serves new golfers.

As far as quality, the heads on these clubs are good but not great. They do a commendable job of getting the ball airborne, which is where the new golfer often struggles. Both clubs are weighted so that their center of gravity is positioned lower than normal. The ball pops off the face at a high trajectory, and it only climbs from there.

The only issue with these two clubs is their shafts. Woods and hybrids are always shafted in graphite, but the flex here soft. Some players will appreciate the flex, as it can add speed to a slower swing. Those who take a mighty lash at the ball will likely find the shafts too soft. There is a whippy feel to them can make it hard to know where the head is in the swing. Otherwise, they are quite usable, and should last almost as long as the irons. 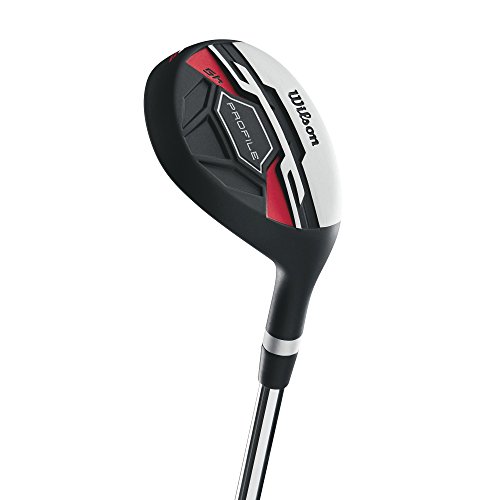 So far, the Wilson Profile XD must seem like a bargain that is too good to be true. The first compromise you’ll be making when playing this set is the putter. New players often wonder if an expensive putter is worth the money. What’s so hard about rolling a ball, after all?

Well, to a point that’s true. But a top-tier putter can inspire confidence. Good putters get the ball rolling quickly so it won’t skip and hop. The ball seems to hug the ground. The Profile XD putter seems an afterthought. It does its job in a pedestrian but workman-like manner.

Pronounced heel-toe weighting does a fair job of extending the sweet spot, and the alignment aids help send the ball on the intended line. But there is very little else going on in the way of technology. And it doesn’t help that the “insert” is really just a painted rectangle. The putter will suffice at first, but it will likely be the second club on the chopping block. 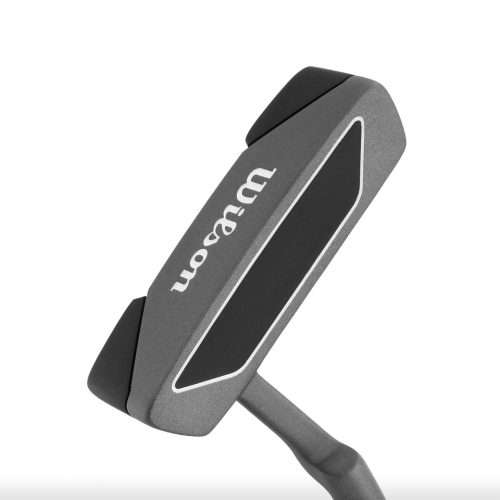 If the putter is the second club you’ll replace from the set, the driver will definitely be the first. As much as it looks like the 5 wood, it certainly does not perform like it. The driver uses the same, too-soft graphite that the other long clubs do, but here it is practically useless for most.

Then there are the longevity issues. The driver is the longest and lightest club in the bag. Even slow swingers can usually approach 90 mph with the driver, and the Profile XD offering can barely take that much use.

On the range, most players hit their drivers the majority of the time. Do that and the shaft on this club is prone to snapping. It will last longer if used less, but it is still on borrowed time. It might work for you in the short term, but plan on replacing it as soon as your funds recover from the purchase of the set. Better yet, replace it with the best driver for beginners you can find. 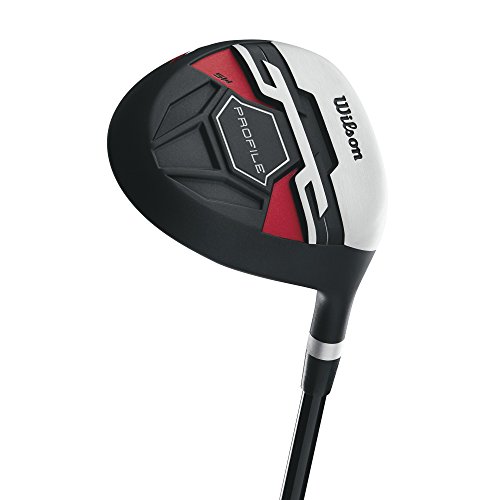 For the asking price, we can forgive Wilson can for not including top-of-the-line headcovers with this set, but the Profile XD headcovers are simply inexcusable. They have a cheap look and feel that is simply unworthy of what is an otherwise nice set of entry-level golf clubs.

At least the headcovers provide adequate protection to the woods and hybrid. Honestly, most users won’t be holding onto the driver very long. A replacement should come with a much better headcover. The same is true for the hybrid and 5 wood.

In the interim, a nice set of personalized headcovers can really dress up this set. They should also prove easier to remove and replace on the clubs during play. If so, they’ll earn the cost of the upgrade.

And if the cost of upgrading headcovers is a deal breaker, try this: Ask your local pro shop if they have any covers that have been left in the lost and found for too long. I’ve scored a couple nice headcovers like that myself after losing one. You can’t be picky, but it works in a pinch.

Let’s get back to what makes this set one that any new golfer should consider. Having a quality bag is more important than it may seem if you’ve never been out on a golf course. The bag that comes with the Wilson Profile XD set stands out in terms of quality and usefulness.

The bag has a seven-way divider. Many starter sets will utilize a 4-way (too cluttered) or even a 14-way (really?) divider, but the seven slots here work well. Then there is the storage space. There are large compartments both left and right, plus three smaller pockets for valuables, balls, tees, etc.

The bag is sturdy and balanced, whether on the legs or not. If you’re planning on replacing these clubs gradually, count on the bag lasting longer than the clubs. You’ll be interacting with your bag more than you will your clubs during a round, so don’t discount the value in a solid, well-engineered golf bag. 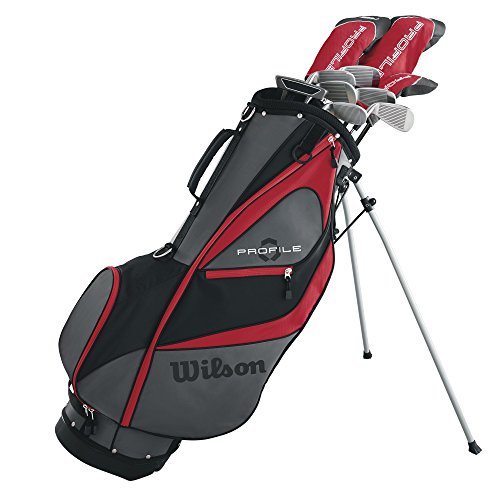 The Wilson Profile XD is an easy set to recommend. It’s hard to justify spending more on a beginner’s golf club set, especially considering that most users will replace most or some of them within a couple of playing seasons. They don’t have to though.

The irons and wedges are a worthwhile investment, and the bag will be hard to replace at any price. The 5 wood and hybrid are also quite usable. Sure, some of the offerings are disposable, but this is otherwise a fine welcome (or welcome back) to the game for any new player.