One thing we find as we improve at golf is that putting is much more difficult than it seems at first. The best putter for a mid handicapper is one that allows us to make our best stroke and sends the ball on line. Our top pick, the Odyssey Stroke Lab series, does just that.

The players on TV make it look so easy. Every putt is online and tracks to the hole, scaring it more often than not. But for amateurs, there is little more frustrating in the game than making a green in regulation and three jacking it for a bogey – or worse.

No putter will completely eliminate three-putts. But if you find yourself constantly missing on the low side or struggling with distance control, your bargain flat stick may be the culprit. We start with our top pick, which is from one of the best putter brands, but any of the putters on our list may be the right one for you. Let’s find out! 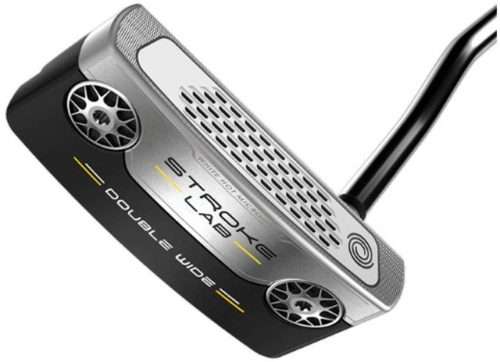 Real innovations in putter design only come along so often. Perimeter weighting, mallet heads and face inserts all had profound impacts. But putter design, for the most part, has remained relatively the same for quite some time.

The Odyssey Stroke Lab series is shaking things up though. In the early 2000’s, Odyssey made a name for itself with the inventive Two-Ball putter. The innovation here lies in weight distribution, but not so much in the putter head. Instead, the weight of the entire putter gets a revamp.

Odyssey’s engineers also set to work on improving the alignment system. They also sought to give Odyssey Stroke Lab putters that classic Odyssey feel and sound with the Microhinge face insert. The result is a putter that promotes intuitive putting and a simple, repeatable stroke. 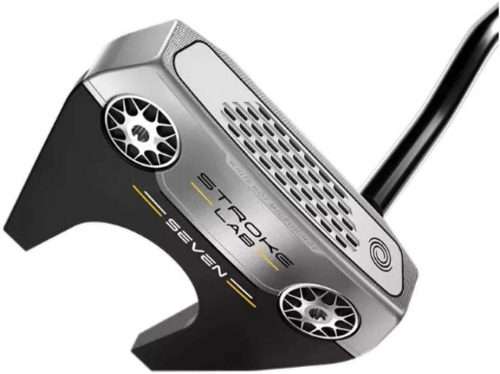 An innovative shaft drops 40 grams of weight in the middle, which Odyssey moves to the heavier putter head and to the butt end via a 30-gram weight.

That new shaft (see a video on YouTube here) combines traditional steel with graphite, lightening it to just 70 grams. The revised weighting addresses stroke flaws such as the length of the backswing, the speed of the through swing and the angle of the face at impact.

The Microhinge face insert produces a satisfying click at impact, and the feel is buttery smooth. But none of that matters if the ball comes off the face skipping and hopping. That is certainly not the case with the Odyssey Stroke Lab Series.

The key to a positive forward roll is for the golfer to impart forward spin on the ball. But that is something most of us struggle to do. Microhinge faces have a firm stainless steel cover with hinged teeth, which is backed by a softer polymer. Those teeth bite into the ball, promoting forward roll sooner and eliminating skipping.

Odyssey Stroke Lab putters come in various lengths and with multiple neck and head designs. Whether you prefer a blade or mallet, there’s a Stroke Lab to suit your tastes. Even the blades are heavier than normal and optimally weighted to help link the players’ hands, arms and body for a unified swing feel. Any stick from this line would be a good candidate for best putter for a mid handicapper status.

Players looking for that classic Odyssey appeal will appreciate the inclusion of the Two-Ball Fang design. Choose the pistol grip to complete the classic look, or go with the oversize grip to get the hands out of the swing. Flow neck and Slant neck designs have toe hang (for rotating strokes), while center shaft and some mallets are face-balanced (straight back and through).

Odyssey isn’t the only mallet putter maker in the game. The TaylorMade Spider has been a force on golf tours around the globe for years now. TaylorMade isn’t conceding anything to its rivals, and the Spider X is proof. It continues to innovate and push boundaries, while helping the improving player beat flaws and conquer the yips.

The TaylorMade Spider X #3 is a favorite of players of all skill levels. Its bright white alignment aid contrasts drastically with the navy putter head color. A thinner black lack helps draw the player’s eye to focus precisely on the sweet spot. Quality materials are a given, as are effortless results. 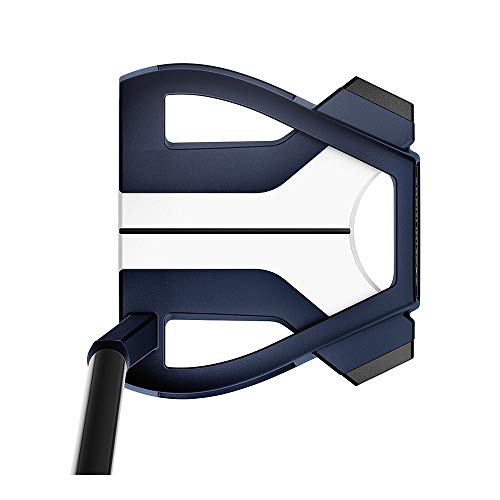 Earlier versions of the Spider putter were already among the most stable putters on the market. But TaylorMade is nothing if not progressive. The introduction of carbon fiber in the sole of the clubhead enabled engineers to better distribute the head’s 320 grams of weight. The improved stability is noticeable, though not revolutionary.

The Pure Roll insert is aptly named. Its 45-degree grooves grab the ball and force it to come off the face with top spin, decreasing the skipping that forces putts off the intended line. To see that line better, TaylorMade incorporates its True-Path optics system.

Whether you find TaylorMade putters expensive in general, or the Spiders specifically, or not is a matter of personal finance. They certainly cost more than many putters on the market, but they are considerably less than some others.

The fact is that countless players trust this brand. TaylorMade makes quality, pro-level gear. Spider X putters can help shave strokes from your game. The level of investment those strokes are worth is a personal decision.

Players of a certain age will instantly recognize the Anser name. This was the title Karsten Solheim (Ping’s founder) gave his groundbreaking first putter design. It was a perimeter-weighted blade, the first of its kind, and it would level the green for all time.

The Anser has seen many iterations since then. The Ping Sigma G Anser is just one of the latest in that long line. There is very little in the way or frills or help here. By modern standards this is a simple blade, which is all some players could ask for in a putter. 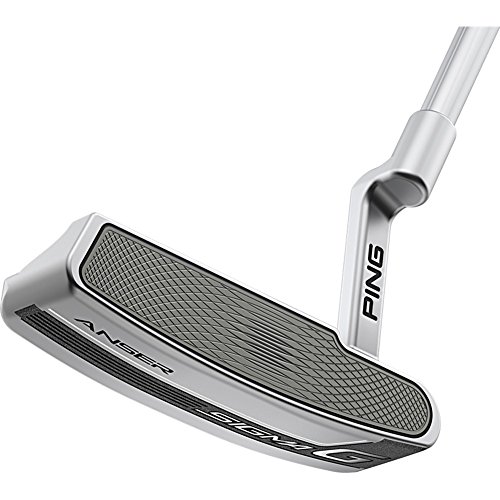 When a player unsheathes a Ping Anser of any ilk, competitors have certain expectations. Here, they assume, is a player who can roll the rock. This player needs little or no help that comes from high-MOI mallets and the like. Classic in every way, a Ping Sigma G Anser is as simple as modern putters get.

No Spring off the Face

The problem with a putter face that springs the ball is that the bounce is unpredictable. On perfect strikes the ball comes off hot, but mis-hits can have dead results. The Ping Sigma G Anser utilizes a soft polymer behind the milled face to normalize the bounce, so repeating swing weights produce consistent results.

Anyone considering a blade, even one as refined as the Ping Sigma G Anser, should be brutally honest. If that player does not pure the ball consistently, the results will be, well, inconsistent. Even many mid handicappers will be better served with a mallet putter – especially if it is a vanity handicap.

Sometimes all we need to get ourselves out of a putting funk is to buy into a new concept. Cleveland’s Frontline Elevado is just such a stick. Like all of the Frontline series, Cleveland takes an innovative approach to the concept of perimeter weighting. Specifically, Cleveland Frontline putters use front loading.

As Cleveland itself points out, most other manufacturers prefer to move the weight of the putter rearward, which is a feature of almost every mallet putter on the market. Instead, the engineers at Cleveland moved it to the face. The weights are visible to the right and left of the face insert. 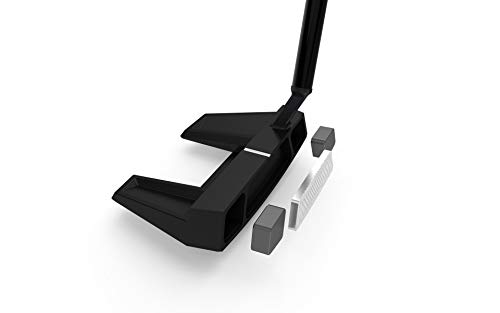 Most manufacturers push the center of gravity in their mallets rearward, but that can be a detriment to some strokes. The tungsten weights in the Cleveland Frontline Elevado move the clubhead’s CG to the front, where all the action happens. The result is a minimizing of the gear effect, or the head’s tendency to twist on mis-hits.

Drawback – Too Much Help for Some

Players who pure the ball may struggle to find a reason to purchase a club that normalizes mis-hits. Better players consider that twisting sensation to be valuable feedback. Eliminating it masks a swing flaw. It minimizes its ill effects without fixing anything. The best putter for a mid handicapper will usually provide at least some feedback.

The SeeMore is a conundrum. In one way, it is a novel design that is sure to draw attention on the course. In another way, it is a throwback to the simplest blades of yesteryear.

Still, with its renowned alignment system and purist’s simplicity, there is an element of effective simplicity in its design. Face-balanced to work for the straight-path putter, this SeeMore design oozes elegance and minimalism. It also rolls the ball quite smoothly, which is nice. 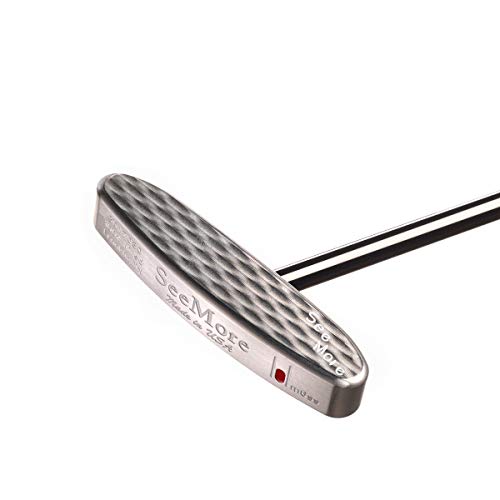 The SeeMore RFT alignment system is a boon to some players. There is a single red line on the top of the heel, which the player hides with the shaft. Once the shaft covers that line, something magical happens. The face is suddenly precisely square to the line. It’s almost cheating.

If increasing MOI were as simple as increasing head weight, every putter would weigh two tons. In the really real world, clubheads become more stable on mis-hits as that weight is pushed away from the sweet spot. On perfect strikes that fact is irrelevant, but how perfect does any mid handicapper strike the ball?

It is a new day in golf club design, and that goes for every slot in the bag. If you’re an improving player using a decade-old putter, you are missing an opportunity to take your game to the next level. We won’t quote the old adage here, but something… something… putt for dough.

Our top pick for the best putter for mid handicapper, the Odyssey Stroke Lab series, gives players the tool they need to break 80 and to do it regularly. There is a Stroke Lab stick for every stroke, and shooting lower scores are as easy as picking the right one for your eye and putter swing path. If only the rest of the clubs in the bag could be so helpful.