Read the Callaway Super Hybrid reviews, and you’ll find it exists in a lonely space. However, it is a club worth considering for your bag. It is a third larger than the typical hybrid club, but still considerably smaller than the average fairway metal – essentially a hybrid between a fairway metal and a hybrid.

As such, the Callaway Super Hybrid can achieve fairway wood-like distances but with hybrid-like playability. It marries the more compact shape of the rescue clubs with the fairway metals’ penetrating flight and longer carry. But it isn’t for everyone.

Better players may consider the Super Hybrid a more workable option than the typical fairway metal.  Average players may find it can’t replace a two-club, metalwood/hybrid combination in the bag. Is it right for you? Read on to find out. 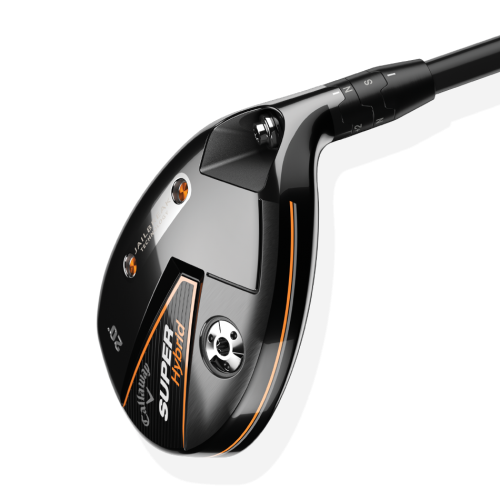 The limited amount of Callaway Super Hybrid Reviews on Amazon may lead you to believe the company’s marketing is overstating things. Look elsewhere and you may be surprised. It has approximately a 4.9 out of 5-star rating on Callaway’s website, with top marks nearly across the board in accuracy, feel, quality and distance.

On Walmart.com, the club carries a 4.8-star average for 31 ratings and the same in 32 reviews on Dick’s Sporting Goods’ website. As we stated, this is a club that does its job, as specific and niche-oriented as that job may be.

One reason many better players avoid hybrids is that they tend to have a left bias. Manufacturers usually design their hybrids with a considerable amount of offset, which helps average players help avoid slicing the ball.

That offset is essentially a band-aid. It helps mask swing flaws that rob the average player of distance, mimicking the results of an on-plane swing. If you already have an on-plane swing path, the offset clubs can invoke a wicked and uncontrollable hook.

The Callaway Super Hybrid eschews offset. It sets up and plays in a much more neutral manner than a typical hybrid. There is no left bias unless you have an out-to-in swing path. 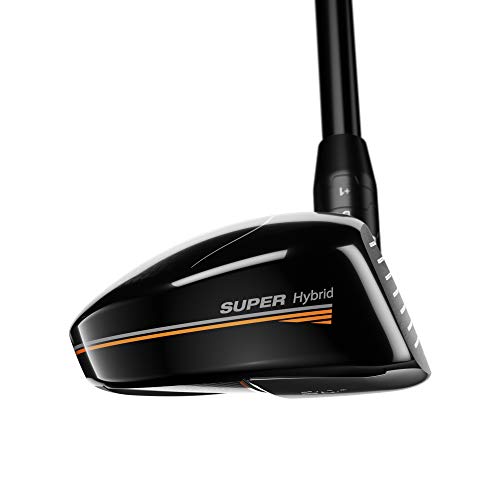 A low center of gravity (CG) helps elevate the trajectory of the golf ball. To lower the CG in the Super Hybrid, Callaway relied on the time-tested method of adding weight to the sole. It did this using internal Metal Injection Molded tungsten weights in the heel and toe.

Thanks to the MIM manufacturing process, Callaway is able to precisely shape and place these internal weights. The result is a tailored, boring trajectory that better players tend to prefer. The ball gets up easily, but ballooning is less of an issue than it normally might be for a skilled golfer. 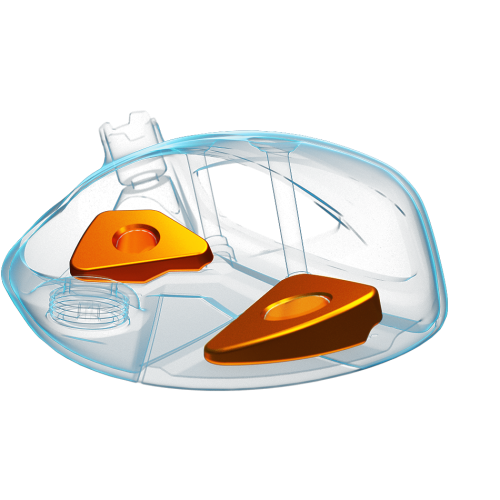 The go-to method for engineering golf clubs with precise weighting like the Callaway Super Hybrid is to make the clubhead as light as possible. This provides the engineer with a precise amount of discretionary weight (i.e. the tungsten weights mentioned above).

For the body of the Super Hybrid, Callaway elected to use tried-and-true titanium. The inherent strength of titanium means it can be thinner and yet stronger than steel and still achieve the same result.

As has been the custom in drivers for some time, Callaway chose carbon fiber composite for the crown. The weave here is triaxial carbon fiber, which is tighter and therefore than some other types. 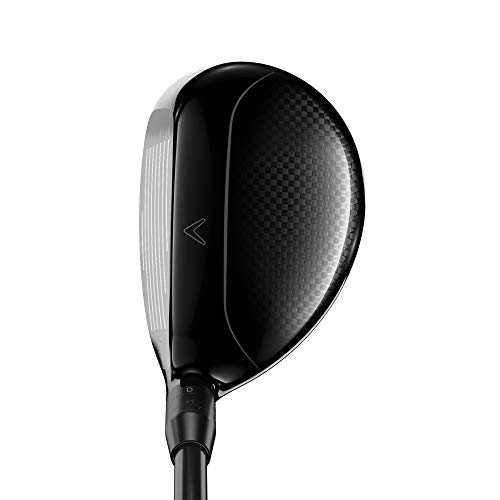 Titanium has been the preferred material for metalwood and hybrid faces for decades now. As mentioned, its superior strength (over steel) allows manufacturers to make faces that are thinner and correspondingly hotter than steel faces tend to be.

The Callaway Super Hybrid also employs the company’s patented Jailbreak Bars, which we discussed in detail in a recent review of Callaway’s Rogue hybrids. The bars are placed directly behind the face, which stiffens the body and transfers more load to the face.

The result is a face with a driver-like spring effect. The placement of the bars also allows Callaway to optimize ball spin, preventing the ballooning that can occur when faster swingers hit a hybrid. The Super Hybrid produces a flatter, more piercing flight for the majority of those players. 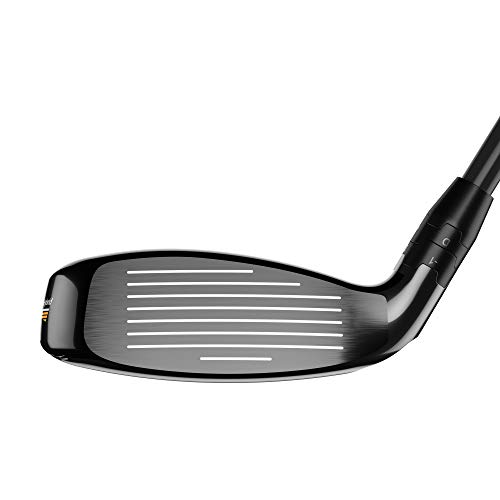 An adjustable hosel can multiply the usefulness of a golf club – exponentially in some cases. The Callaway Super Hybrids are all adjustable for loft. Users can dial loft down one degree or up two degrees. Whether you change loft for varying conditions or courses, or if you just set it and forget it, adjustability is a nice trait to have.

When clubs are only adjustable for loft, however, some players can find the results less than playable. This is because changing the loft tends to also affect lie angle, which is why decreasing loft can sometimes induce a hook, especially when the club has offset.

The Super Hybrids combat this effect by allowing the player to also adjust the lie angle. So, when dialed up in loft, a player can choose the upright lie setting, or the player can switch to the standard lie when dialing down loft. 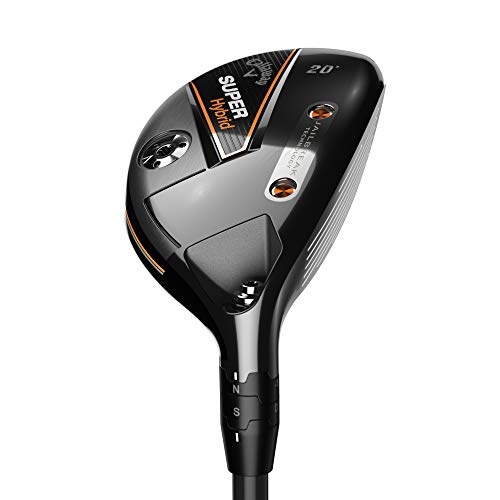 It is true without a doubt that you will pay a premium for the privilege of putting a Callaway Super Hybrid in your bag. Its asking price is possibly more than the driver you’re playing now, depending on its age. However, the materials in this club are all top-notch and somewhat exotic.

The premium ingredients also extend to the stock shaft, which in this case is a Mitsubishi Tensei CK Orange. Weighing in at 85 grams, the Tensei CK Orange is made from a mixture of carbon fiber and Dupont Kevlar. It has a counter-balanced design and extremely stiff tip to lower spin and launch characteristics.

The low spin and launch help produce the piercing, boring trajectory better players usually prefer, but they are less beneficial to players with slower swing speeds. Higher handicappers who wish to put a Super Hybrid play will almost invariably need to be fitted for softer shaft, which explains why Regular is the softest flex available here.

All Callaway Super Hybrid reviews could start and stop right here. There is little more than you can say about this club than that it does its job. Callaway built the Super Hybrid to be longer than the fairway woods of past years, but it can compete with many currently produced ones.

It is not simply a compact metalwood either. Its shape and design is pure hybrid, though it leans more to the side of the woods and less to the iron-replacement side. There are other clubs that do the same thing, but they tend to be ultra-remedial and slot in the “super game improvement” sphere.

The Super Hybrid is something altogether different. It blends the distance of metalwoods with the accuracy and playability of hybrids. It is an interesting concept with possibly limited appeal, but as such it has very little real competition in today’s marketplace.

Fairway woods can seem bulky at the address when playing them off the deck, but that heft can inspire confidence when the ball is on a tee. The opposite is true for hybrids. Compared to a long iron in a tightly mown fairway, well, there is no comparison. But hybrids seem to require more precision from a tee.

To a skilled player, fairway woods are equally playable from the tee box or the grass. Yet they are still distractingly large, which tends to widen dispersion. The Callaway Super Hybrid should enable those better players to eliminate their fairway woods altogether and open a slot, perhaps for another wedge.

For average players, fairway metals are often merely a more-trusted driver, seeing use strictly on the tee box. Smaller, more iron-like hybrids are infinitely more playable from the grass for most mid- to high-handicappers, let alone how useful they are for questionable lies.

Callaway never intended the Super Hybrid to appeal to the average golfer. It is a more-accurate fairway metal by design, which is something that seems to have universal appeal but in practice really doesn’t. It is a beautiful execution

Consider this to be a function of the whole “for better players” thing. Hybrids were originally designed to help average players who struggled to successfully hit long irons. The Callaway Super Hybrid results from a different line of thinking. It is meant to be a more accurate, playable fairway metal.

For better players, the Super Hybrid may make fairway woods redundant altogether. These players get no benefit from oversized clubheads and typically consider them remedial. Smaller clubheads are more workable.

Having been designed to help higher-handicap players, hybrids are often equally remedial. They tend to have a distinct draw bias thanks to an offset design, and their low center of gravity gets the ball up quickly. These attributes can be transformative for a weekend duffer.

However, better players have little or no need for such help. An ultra-low center of gravity can cause distance-sapping ballooning if you rely on backspin the lift the ball, as better players tend to do. And that draw-inducing offset? It isn’t so helpful when it causes a screaming duck hook.

Soon after Callaway released the Super Hybrid, it became obvious that there was going to be an issue with availability. As a niche product, the company apparently did not anticipate much of a demand for this club. It is actually refreshing to see a manufacturer produce a club without expecting much return on its R&D investment.

But the demand there would be. Once the Callaway Super Hybrid reviews were in, sales took off quickly. Callaway released the Super Hybrid in the early autumn of 2019, and it was an instant hit. Sales soon outstripped the limited supply. Backorders and waiting lists resulted.

It isn’t impossible to get the Super Hybrid yet. Callaway is surely working hard to fill orders. The company obviously underestimated either the size of this niche or our collective vanity. Can there really be that many low handicappers who despise their fairway metals? 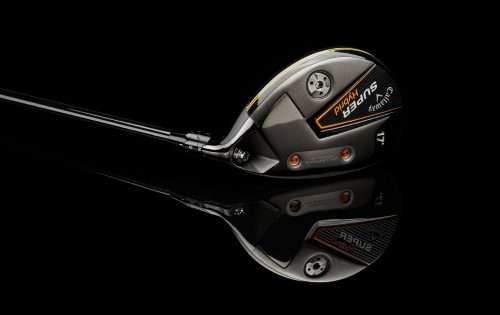 The Callaway Super Hybrid fits its niche nicely. For players who want either a more hybrid-like fairway wood or a more wood-like hybrid, there are few other options on the market. Really, there is none better.

However, for your typical hybrid shopper, it is hard to see this club as a good fit. Adding bulk doesn’t make a rescue club better from the turf, and it can make shots from the rough and fairway bunkers much more difficult. That’s a lose-lose for the average Joe.

That said, players who prefer a compact metalwood should give the Super Hybrid a try. You’ll give up a few yards to your 3 wood, but you may find your trusty 4 or 5 wood to be suddenly obsolete. The Super Hybrid is likely more accurate and softer-landing than the woods you’re currently playing, and that’s a win-win no matter how you shape it.