They may appear to be just like all the hybrids in play since the first rescue metals made their appearance at the turn of the century, but there is much more going on here than meets the eye. 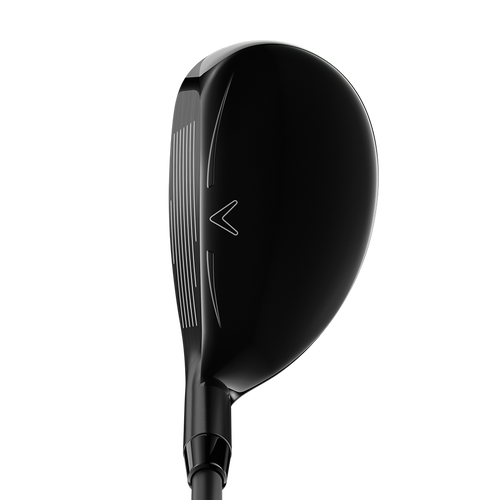 These are impressive levels of approval, and they are especially unusual in the hybrid segment. Hybrid golf clubs often earn cult-like levels of devotion, but there are typically quite a few misses for every hit. Its success is a testament to the Rogue’s supreme playability.

After all, what good is a rescue club if it can’t rescue you from the cabbage or the jungle?

Driver Technology in a Hybrid

It didn’t take long for modern engineering to figure out how to cram the best driver technology into fairway woods. Those clubs aren’t usually that much smaller than drivers to begin with, so flexible faces and multi-material heads were a natural progression. It took a bit more doing to squeeze driver tech into a hybrid, but thankfully those days are upon us.

The Callaway Rogue hybrid reviews are awash in praise for the company’s efforts here, and it’s not just out-of-date, miniaturized driver tech. The technology from the recent Rogue drivers is front and center in features like Jailbreak tech and the trampoline-like Hyper Speed Face Cup that sends the ball a mile with minimal effort.

Today’s manufacturers are pretty much all building drivers the bump right up to the edge of the COR limit set by the rules of golf. There is still plenty of room left to improve for the other woods and the hybrids. As manufacturing techniques improve and A.I. gets firmly implanted in golf club design, expect hybrid performance to increase dramatically. 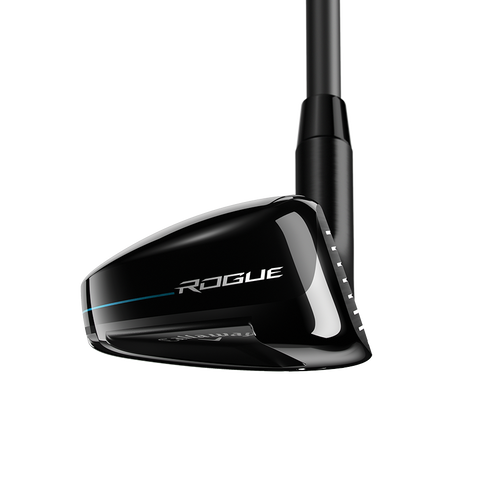 Any Callaway Rogue hybrid review has to include the company’s patented Jailbreak Technology. This feature consists of two titanium bars that connect the inner crown to the sole of club. It may seem gimmicky, but Callaway’s engineers had a sound reason for including it.

Callaway first joined a driver head to its sole with the Gravity Core feature on its Big Bertha series in 2013. That centrally located insert allowed users to move the CG vertically, but its engineers began playing with the positioning of vertical bars.

They noticed that, as they moved the bars around (two bars ended up being ideal), the clubhead become more or less stiff. Placed nearer the face, they produced a stiffer clubhead and directed more energy from the strike to the face and thus to the ball.

On the first prototypes, Callaway welded the bars into place. Unfortunately, pro-level swing speeds would wreck the setup. The solution was to cast the Jailbreak bars into the clubhead. The result is a solid clubhead and a noticeable extra couple miles per hour ball speed off the face, which translates into added distance. 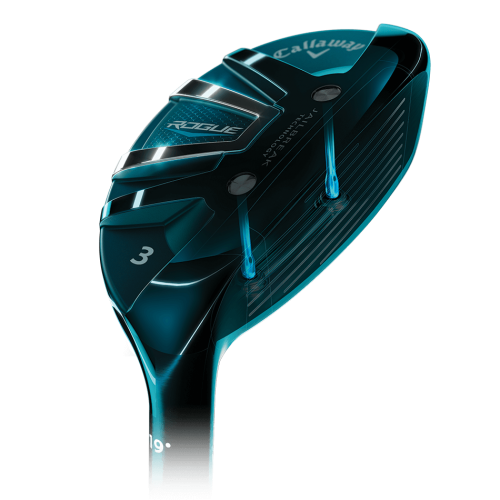 Transferring more swing energy into the face is all well and good, but if you don’t have one of the hottest faces on the market, you won’t see any real gains. To get the most out of the Rogue hybrid, Callaway utilized its Hyper Speed Face Cup technology.

Callaway first utilized this face tech on its super popular XR series fairway metals. The cup-shaped face is forged from Carpenter 455 stainless steel. It owes its spring effect to the thinness of the steel at its edges. Callaway calls this Variable Face Technology (VFT) and the additional trampoline effect is noticeable in the clubs that use it.

The Hyper Speed Face Cup also boasts a large sweet spot. You get maximum distance from a wider section of the face center. Even poorly struck shots get playable results though. That forgiveness is a plus considering the types of recovery shots most of us ask from our utility clubs. 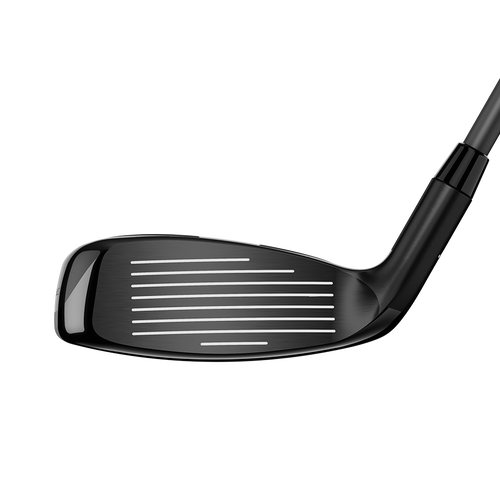 The Callaway Rogue hybrid gives most players noticeably more carry than the previous generation of Callaway hybrids, but why? Part of the reason is the hotter face, which gives higher ball speeds. But there’s more to the story.

Like most modern clubmakers, Callaway’s engineers sought to optimize the Rogue’s CG for an ideal trajectory. They were able to use precise geometry in the internal weight to create what Callaway calls Internal Standing Wave technology.

Callaway uses metal-injection molding to create a tungsten internal weight with an asymmetrical shape. Each shape is unique to its metalwood, iron, or, in this case, hybrid. The Internal Standing Wave design is the result of experimentation using computers. The engineers tweak its shape and location to optimize CG for the ideal launch.

Importantly, Callaway’s engineers place the Internal Standing Wave weight as close as possible to the face without touching it, so as not to inhibit the face’s ability to flex. The combination of high ball speed and ideal launch trajectory is why players tend to carry the Rogue hybrid farther than hybrids from previous years. 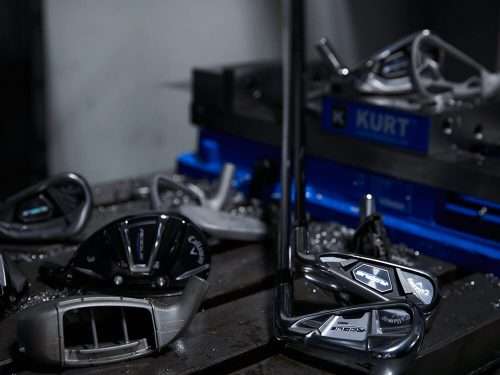 The stock shaft in all Callaway Rogue Hybrids is the Aldila Synergy 60 HYB shaft. Callaway did offer other shafts as options when the Rogue first hit the market, but most buyers chose to retain the stock option. It is a premium shaft from one of the top shaft companies.

Aldila’s Synergy 60 hybrid shafts have mid kickpoints as well as mid torque values. The number in the Synergy’s name is actually a bit of a misnomer. The shafts actually vary by 2 grams depending on the flex.

Still, being in the 60-gram range means these shafts are half the weight of the typical steel iron shaft. They are also considerably lighter than previous-generation Callaway hybrids. The light weight contributes to higher clubhead speeds. 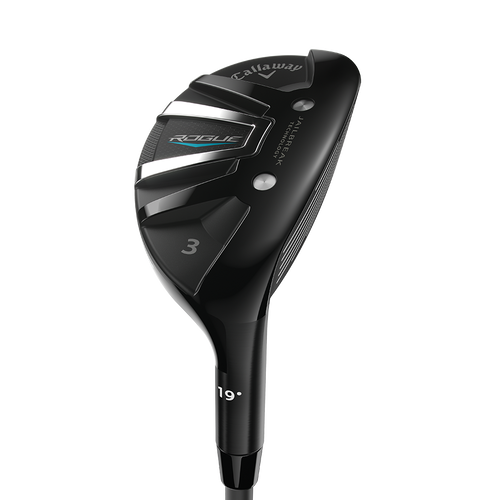 Great for Scratch Players and Low- to Mid-Handicappers

The Callaway Rogue hybrid is designed for better players, but, like with putters, that designation runs the gamut from professional level down to legitimate mid-handicappers. There is a bit of help designed into these clubs, but it is well-hidden and unobtrusive.

Low handicappers are normally adept at controlling trajectory, so the low CG doesn’t cause the ball to balloon, a situation which can rob better players of distance. The ball leaps off the face, but initial trajectory is just part of that equation.

For the higher handicapper out there, Callaway also built the Rogue Hybrid X. This option has a bit larger clubhead and is a bit more remedial than its stablemate. However, it is a better option for players who struggle to get the ball airborne. 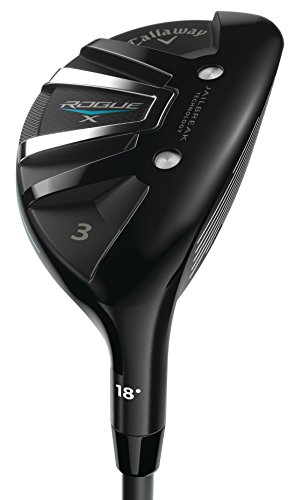 Some clubs are so good at what they do that the player simply needs to make contact. The club will do the rest. Like all the positive Callaway Rogue hybrid reviews prove, this is that type of club.

Swing too steeply and the ball jumps up a bit too quickly and flies short. You won’t know it from the turf interaction though. Similarly, toe shots and heel shots feel almost no different from center-struck shots. Only the slightly different yardage results will tell the tale.

How much of a drawback this is will depend greatly on the user’s skill level. Better players rely on the stinging feedback they get from off-center shots to tell them they need to make a minute adjustment. These are adjustments that the average player cannot normally discern or make.

Most of those average players will actually appreciate a club that does not protest too much when not swung perfectly. A failure to dig and a reluctance to hook or slice are not problems, but rather positives. The play may be robotic, but the results are more consistent than most of us deserve.

Most of the pro-level, top-tier hybrids on the current market have adjustable hosels, which allow players to make minute adjustments in loft and lie. However, the Callaway Rogue hybrids lack this feature.

In truth, an adjustable hosel is more useful in drivers and fairway metals than it will likely ever be in a utility club. Hybrids like the Rogue perform one of two functions, and neither one really calls for much in the area of adjustability.

First, the hybrid is asked to the job that it was first designed to do. Namely, that means getting the ball out of a bad position and advancing it as far as possible. There is rarely a time in these rescue situations when a hybrid’s loft is really a critical value.

Secondly, hybrids fill a gap in the player’s bag between the longest iron that player can use comfortably and the fairway woods. Like all hybrids, the Callaway Rogue hybrid is meant to replace the 3 iron, 4 iron or even the mid-irons that came with the player’s iron set.

The loft of a hybrid will normally situate it precisely in that gap in the bag that corresponds with its iron number. Making minute adjustments in loft may help dial the hybrid in more precisely. However, not many of us are that precise with our long clubs. Most of us will set an adjustable hosel one time and leave it there forever.

The golf industry is awash in marketing speak and empty promises. Each company is occasionally guilty of overstating its clubs’ abilities. But Callaway deserved to brag about the entire Rogue series. The Callaway Rogue Hybrid reviews are so hyperbolic because these clubs are that impressive.

Every once in a while an equipment technology comes along and makes you wonder how no one ever thought of it before now. The Jailbreak technology in the Rogue series, which carries on in the Callaway Epic series, is likely one of those that will endure.

The Callaway Rogue and Rogue X hybrids are more akin to miniaturized drivers than anything ever released on the marketplace. They are among a fresh batch of equipment that has lit a fuse on a technology race that has already brought some surprising and innovative ideas to market, and will likely keep doing so for years to come.