Most long-time players battle the yips at some point, but they are fixable. Unless there is a physical issue that causes a golfer’s hands to shake, the yips normally result from fear of one of two things. Players worry that they will mess up either the line or the speed of the putt.

They get so apprehensive about missing the putt that they get frozen, making a half-hearted stab at the ball. To fix this problem, we must address the underlying cause. The Odyssey O-Works Red Tank #7 gets top pick as the best putter for yips because it fixes both issues. For less remedial solutions, continue reading.

Until recently, the go-to club for golfers struggling with the putting yips was the belly putter. What made that club work was that the player would anchor the club against the torso, which helps to get that natural pendulum motion that the great putters have. Even some of the top players on the PGA Tour used belly putters because they really cured the yips.

When the USGA and R&A outlawed anchoring the putter in 2016. Now, golfers must sort out their game-wrecking yips on their own, without the benefit of the belly putter. Luckily, the club manufacturers are hard at work finding ways to beat the putting yips without anchoring. Here are some of their offerings. 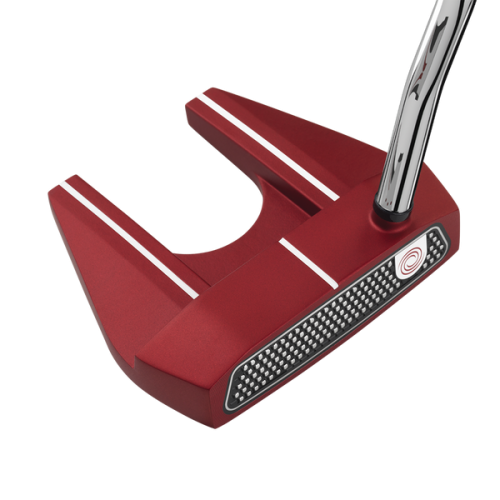 A heavy putter can smooth out a twitchy stroke. Gravity aids the club through the strike, and a more natural pendulum motion results. At 375 grams, the heads on the Odyssey 2018 Red O-Works Putters are massive, especially the Tank #7. It wears its heft well, though. The fangs of help to streamline its look while moving weight to the perimeter, increasing MOI to help with off-center hits. 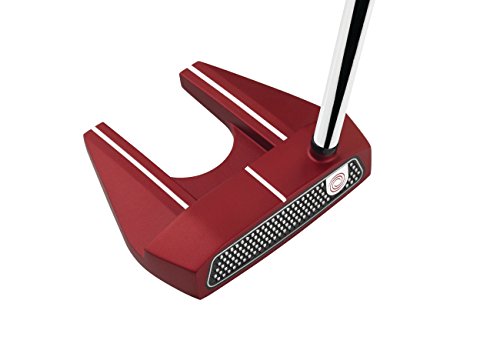 For golfers who fret about hitting their intended line, the Odyssey Tank #7 has a solution. The fangs are topped with a bright white alignment line, which both work in tandem with a center line directly behind the ball.

While the Tank #7 is available in a variety of shaft lengths, the versions with longer shafts do a better job of counterbalancing. They position more weight above the player’s hands, making all that mass feel lighter and helping on longer putts. Either way, though, and it’s hard to go wrong.

Golfers with the putting yips the world over cringed when anchoring the putter became illegal, and rightly so. Here was a defense against twitchy strokes that was simple and effective. A solution of sorts was found in counterbalancing.

Like other manufacturers, Callaway (maker of Odyssey) elected to increase head weight dramatically. A counterbalanced putter like the Tank #7 then counters that weight with a heavier grip. The grip is also longer so the player can grip down, moving weight above the hands.

That combination also serves to move the balance point up the shaft, further away from the club head than normal. With the weight closer to the hands, the golfer doesn’t feel as much of the heft. Strokes get smoother as a result.

One thing that can easily send a putt off line is having the face slightly open or closed at impact. To combat this, many yippy golfers adopt a swing path that goes straight back and straight through on the ball’s intended line rather than on an arc. A problem can occur when too much weight is on the club’s toe to allow for a smooth, down-the-line path.

A face-balanced putter like the Odyssey Tank #7 uses a hosel that is precisely engineered to eliminate the opening and closing of the face. If you prefer to open and close the face in the swing, opt for a putter with toe hang. But for curing the yips, straight back and through is preferred.

Moment of inertia (MOI) is a physics term describing an objects resistance to twisting. For golfers, the key issue is stability. So for our use, high MOI simply means a more stable clubhead. That stability keeps the clubhead stable on off-center hits.

Manufacturers increase MOI by moving weight to the perimeter or to the rear of the clubhead. With the Tank #7, Callaway did both. The heavy fangs move weight away from the center in both directions, so mis-hit putts are barely perceivable.

From 20 feet and in, the Odyssey Tank #7 is deadly. It is easy to align, and its precise weight distribution makes figuring out how hard to hit the ball easy. At longer distances, any mallet putter will suffer when compared to a blade.

That said, there is no mallet putter better suited for those long bombs. The weight of the putter head melts away in the hands, and a smooth stroke is almost inevitable. The counterbalancing effect becomes less pronounced in shorter shaft lengths, but at 35 inches and above, longer putts are much easier to judge than with most mallets.

The putters on this list can all help with the yips, but easy on the wallet they are not. Golfers on a shoestring budget can still get much of the help offered by the pricier competition. The Wilson Staff Infinite Putters Bucktown is a heavy mallet with perimeter weighting and effective alignment lines. 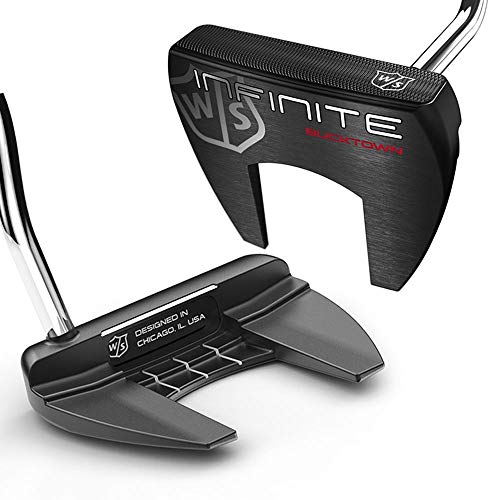 The Bucktown is a counterbalanced putter with an oversized grip that helps get the hands out of the swing. The heavy putter head promotes a pendulum swing, and the deep and wide center of gravity forgives off-center hits.

Wilson Staff may not have put the hours into computer-aided design that its competitors do, but you wouldn’t know it from the Infinity series. These are sleek putters. The Bucktown’s perimeter weighting and counterbalancing are a plus for anyone’s game, not only high handicappers.

Having a dark black finish may not be the in thing at present, what with the prevalence of brightly colored putters on tour. But the contrast between the white lines and the dark clubhead makes alignment easy. The lines jump out at you if you look at them, but when you stare at a spot on the back of the ball, they blend in seamlessly and provide great feedback.

There’s really nothing to fault with any of the Infinity series, including the Bucktown, that isn’t made up for with the cost of entry. The face insert may feel a bit soft for some, but the cash saved can make that sensation go away quickly. When you playing competitors see Wilson on the head cover, they may make assumptions. That too fades when the balls start to drop.

You might not know it by looking at it, but the TaylorMade Spider X Copper Putter is probably the least corrective club on this list. The Spider has long been popular on the PGA Tour for its ease of use, though its looks were once considered outlandish… no longer. 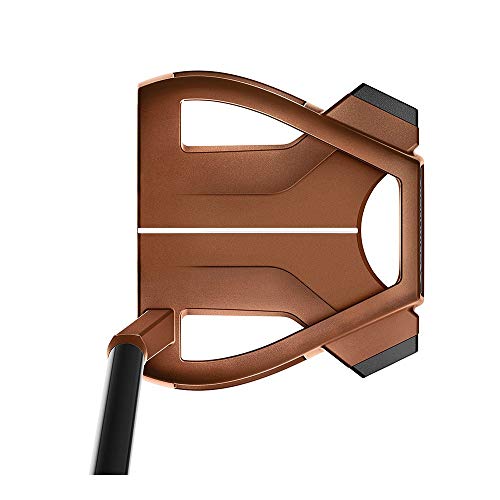 The new copper color on the Spider X contrasts beautifully with the simple, single alignment line. It also has a slight (30-degree) toe hang, allowing for a slightly arced swing path. The 320 gram head is the lightest on this list as well, but MOI is still impressive thanks to TaylorMade’s use of a carbon composite sole.

The Pure Roll insert was always a love-it-or-leave-it deal, so TaylorMade decided to fix it. The tinny hit was owed to the thinness of the material, so the engineers beefed it up. Strikes now feel firmer, with a pleasantly satisfying sound. The 45-degree grooves impart topspin for a quicker roll with less skidding.

TaylorMade shaved 30 grams off the Spider X’s weight versus the previous generation, yet still managed to improve MOI. The engineers did this by switching to a carbon composite sole. The weight they saved there could then be placed in precise locations to the side and rear, optimizing MOI and center of gravity for a more forgiving Spider than ever before.

There are other models of the Spider that offer a more conspicuous sight line and a balanced face. This version is more for a mid-handicapper that is developing a mild case of the yips. Less remedial than the others on this list, the new Spider X still provides plenty of help. It just does it less intrusively.

Anyone with the yips who refuses to move to the mallet segment of the market will soon find that there aren’t that many options available. Still, with manufacturers vying to fill the void left after the anchoring ban, some interesting options are hitting the market. What we’re looking for here is a hefty blade, and the Cleveland Golf Huntington Beach Soft Putter #8.5 fits the bill. 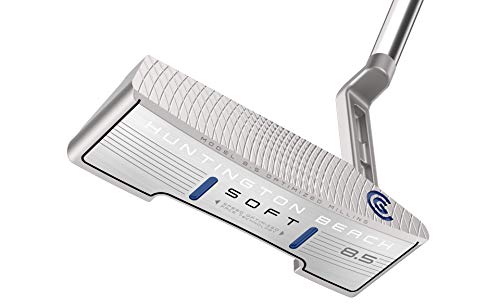 The head on the #8.5 tips the scales at 360 grams, and that weight is apparent in the stroke. Deceleration is next to impossible, as gravity seems to pull the clubhead into the strike. There’s no counterbalancing here, but the milled face (no insert) drives mis-hits about the same distance as center-face strikes. The soft feel is due to the use of 304 stainless steel.

Feel on the Greens

The Huntington Beach series all have a responsive, soft feel that better players tend to prefer. Some putters cheat and get a different feel with an insert. Instead, Cleveland opted to use soft, 304 stainless steel for the head material. Once you get accustomed to it, the face becomes buttery, and you’ll get used to it as soon as the first bomb drops.

Cleveland isn’t the first company to use diamond-shaped grooves to alter the roll across the face. Others do it too, because it works. The pattern tightens up in the center, but the wider grooves at the edges are key. These grooves provide a touch more topspin, so toe and heel strikes roll out the same distance (more or less) as pure hits.

Just because a club uses extra weight to increase MOI, that doesn’t mean it needs to be noticeable. The heft of the Cleveland Huntington Beach 8.5 never goes away. It takes effort in the backswing that is apparent, though on the through swing it disappears. A bit of extra weight is a small price to pay for superior forgiveness, especially when it doesn’t look remedial.

Each club on this list can help a yippy golfer roll the rock better. They just do it differently. Our winner, Odyssey’s O-Works Red Tank #7, gets best putter for yips honors because it addresses all the issues of a twitchy stroke. The others do so a little less aggressively, which may be just right for certain players.

No matter which solution you choose, don’t take the yips lying down. Golf can be fun again, even after the shakes and twitches start to wreck your game. Sure, mental adjustments and grip changes can provide lasting benefits. But equipment changes can do the same thing much quicker. The answer is there, you just have to find the right one for you.