Our top pick for best golf balls for colder weather, the Titleist Tour Soft, are playable in the cold without inducing the stinging sensation golfers dread.

In cold weather, even golf balls we normally think of as soft can become hard as stone. The hands sting from the vibrations, and we cringe in anticipation just at the moment of the strike. That’s no way to play golf.

So consider changing up the ball you put in play the next time the temperature drops. Your hands – and your scores – will thank you. 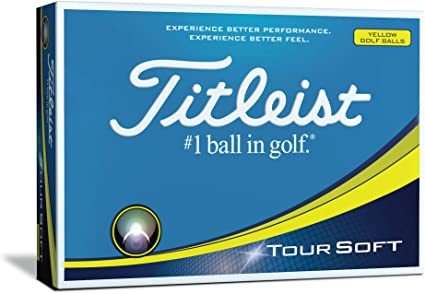 The Titleist Tour Soft is one of the highest performing golf balls in its price range, full stop. Titleist utilizes one of the thinnest synthetic covers on the market to increase the ball’s core size, resulting in explosive distance off the tee.

That cover gives the Tour Soft a cushiony feel around the greens as well, enabling short-game spin that approaches the feel of the company’s venerable tour balls. However, the use of synthetic cover materials and a two-piece design keep the price in range for most players.

While perhaps not as bargain-oriented as some others on this list, the Titleist Tour Soft earns top pick honors as best golf balls for colder weather because it punches above its weight. It plays most similarly to a players’ ball of any example on this list, and will suit most players even when the temperatures warm. 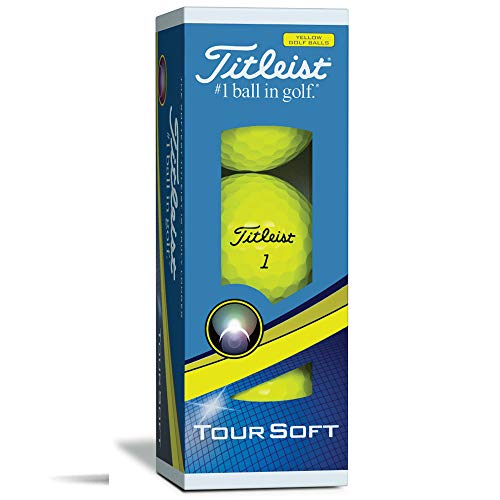 Not Just for the Cold

When Titleist engineered the Tour Soft, its goal was to produce a more-affordable players’ ball. To a large extent, it is fair to say it succeeded. The feel here is quite similar to a Pro V1, though spin with the scoring clubs is noticeably reduced. Still, the Tour Soft spins plenty for most of us mere mortals.

The sensation at impact is softer than most other balls in its class, but faster swings won’t blow up the core like they will on the competition listed here. For players with 90-plus mph swing speeds, there really is no legitimate competition in colder temperatures.

When switching between the Tour Soft and a Pro V1, it can be difficult to remember which ball is in play. The 4CE grafted cover (proprietary to Titleist) is a revelation. No synthetic cover on the market outdoes the Tour Soft in terms of feel.

That soft touch translates into buttery greenside play, but it is most apparent on approach shots when playing on colder days. As temperatures approach freezing, many of us will subconsciously brace ourselves for impact when pinching it off the turf. You’ll soon notice yourself forgetting the temperature when playing a Tour Soft though.

While not quite the problem it was years ago, the soft-ball category can still suffer in the distance department. It really all boils down to rebound speed. Softer cores tend to compress quite easily, which is why they are better for colder temperatures. But, they also rebound more slowly than do firmer cores.

That reluctance to rebound can give soft-feel balls a mushy feel, which is only made worse by high swing speeds. The Tour Soft achieves much of its softer feel from the proprietary cover, though, which enabled Titleist to achieve the desired feel while using a higher compression core.

One of the benefits of synthetic cover materials is that they are often more resilient than the more expensive urethane covers. So players save some dough at the cash register, then reap extra benefits by keeping the balls in play longer (as long as they stay dry).

The buttery soft cover of the Tour Soft balls is impressive in most respects, but longevity is not one of them. These covers cut nearly as easily as urethane covers do. That doesn’t mean they are defective or even problematic, but they aren’t as long lived as some of their competition.

Golfers unfamiliar with the Pinnacle Soft may be surprised to see it ranked so highly here, but on cold days this ball is real hand-saver. Soft is an understatement here. The synthetic cover can stand up to balls costing twice as much in terms of playability and longevity. Around the greens, this ball is tough to beat in any weather. 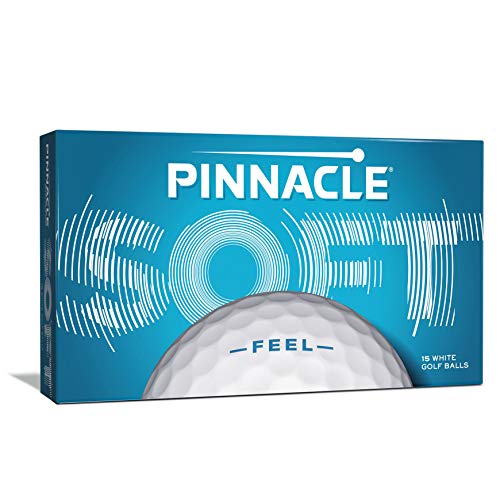 When comparing cost effectiveness, don’t neglect the fact that the Pinnacle Soft comes in a packs of 15, rather than the typical even dozen. An extra three balls may not mean everything, but to those players who tend to splash more than a couple balls per round, it adds up quickly.

From 100 yards and in, there are few golf balls that have noticeably better feel than the Pinnacle Soft. Sure, there are many that can compete, but most of those balls cost at least twice as much. For the price, these balls are nigh impossible to beat at close range.

Drawback – Not for Heavy Hitters

To be fair, no golf ball on this list will play well for the fastest, tour-level golf swings (nor were they designed to). However, even above-average swing speeds will blow up the Pinnacle Soft’s mushy core with anything above a mid-iron.

Faster swingers tend to dial it back anyway when the temperatures drop, more out of a sense of self-preservation than to avoid losing distance. Those bumble-bee hands can smart. Just know that selecting this ball will force you to dial back a bit if you swing above 90 mph or so.

When the going gets tough and the frozen turf crunches beneath your feet, you’d better be playing a truly soft golf ball. On those days, few balls on the market can compete with the Wilson Staff Fifty Elite. The 50-compression core is about as soft as it gets on today’s market. 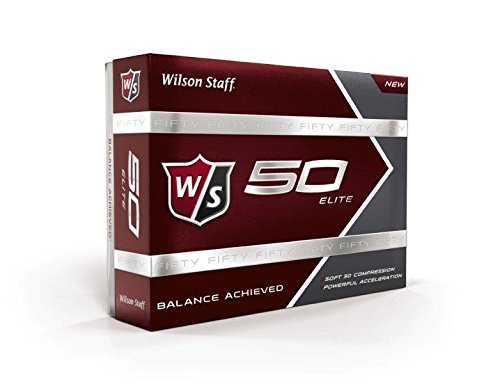 Did we say soft? The Wilson Staff Fifty Elite’s 50-compression core is as soft as it gets in the modern game. Many slower swingers prefer this ball even in warmer weather, but this dog will hunt for many more players when the temps get extreme.

One of the hidden benefits of such a squishy core is that the ball stays smashed onto the clubface fractionally longer than it does with higher compression balls. The benefit there is a reduction in distance-killing spin with the driver.

Drawback – Only for the Cold

Honestly, unless you are among the slowest of swingers, forget playing this ball in warmer temperatures. On shorter shots, you’ll be hard pressed to find a better feeling ball. But with anything more than a mid-iron you will come up short over and over again. It’s a popular choice for both senior and junior players though.

Speaking of popular, no list of the best golf balls for colder weather would be complete without including the Callaway Supersoft. This ball lit the golfing world on fire when it was first introduced. Until then, soft balls meant short shots, without exception. But here was a ball that was smooth around the greens and still flew reasonably well of the tee.

On colder days, the Callaway Supersoft loses little if any of its appeal. Soft without being ridiculously so, it plays well for most players even in warmer conditions. On cold days, almost anyone can play this ball.

It’s been a few years since the Callaway Supersoft first hit the market, and it has earned a stellar reputation in that time. Such is its playability that Callaway has never seen fit to alter the ball, save for the addition of a few bright colors (also great for frozen turf).

These balls are easy to compress but will still snap back into shape fast enough where even 90 mph swings can use them. Swings much faster than that will blow up the core, though, so be prepared to dial it back a bit.

Drawback – Overly Soft for Some

On cold days, these soft-feel balls are just about perfect. The cold temps seem to firm them up, making them play more like a players’ ball. When temps warm up, though, better players will lose distance with these.

To golfers of a certain age, the original Noodle golf ball is somewhat infamous. One of the original soft-feel balls, Noodles come into their own when the temperatures start to fall. Noodles are also made by TaylorMade, so you know they’re of decent quality. 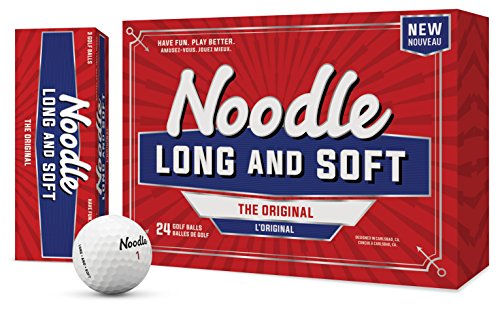 Compression ratings can be misleading, and it is best not to rely on them to tell the whole story. The numbers are too dependent on manufacturer testing methods to be reliable. That said, man are these balls syrupy soft. Rarely do they ever feel harsh, regardless of what the thermometer reads.

How much of a bargain Noodles really are depends a lot on whether you hit anything hard with them. The covers don’t fray like some others, but they are easily scuffed by tree bark. Hit a cart path and that’s pretty much it for that ball. Luckily, they’re so cheap that it doesn’t hurt to just swap out the damaged ones.

Titleist has a reputation for making players’ equipment, and for the concurrent price tags of its gear. However, the Titleist DT TruSoft ball is more moderately priced than much of Titleist’s offerings. It is a harder ball than most of the others on this list, but that brings with it the extra distance of its firmer core.

Benefit – Longer Than Other Soft-Feel Options

Titleist managed to keep adequate distance characteristics with the DT TruSoft balls thanks to a reduction in spin. Some of the competition can spin too much, either ballooning up or losing distance with left or right spin. Staying on the face longer means these balls spin less, so they fly straighter and longer for most players.

Drawback – Lack the Feel and Spin of the Titleist Tour Soft

Because of price, the DT TruSoft is aimed at different players than are the Titleist Tour Soft balls. That said, there is really no comparison between the two. On cold days, there is absolutely nothing wrong with playing the DT TruSoft. But better players will lose distance, especially when the mercury rises.

Soft-feel golf balls are the only way to go when temperatures get uncomfortably low. Among that genre, the Titleist Tour Softeasily earns our recommendation and top-pick honors for the best golf balls for colder weather. No other ball on this list offers as close to a players’ ball feel.

Even in warmer conditions, the Tour Soft should be a go-to option for all but the fastest swings. That said, any ball on this list will suffice when playing of the coldest of days. Golf may have been invented by shepherds whacking a rock around a field, but there’s no reason for anyone to ever feel like they’re hitting a rock again.