Our top pick for best golf balls for 100 mph swing speed is the TaylorMade’s TP5x. It offers a compromise between value and performance, but it’s all relative.

There’s really no way around it. If you swing your driver more than 100 mph, the only benefits you will see from a golf ball is moving to tour-level balls. Nothing else will make much difference, and using a low-compression ball will likely mean sacrificing yards.

Having a fast golf swing is a double-bladed axe. You have the distance everyone else is trying to get, whether through swing tweaks or equipment boosts, but you pay for it. Fast swingers’ options are limited, with essentially only one offering from each manufacturer. Worse still, those options are all tour balls, with their requisite prices. Higher handicappers should look elsewhere.

Part of the reason tour balls are so pricy is that they all have cast urethane covers. Urethane is the polymer of choice for getting more spin with the scoring clubs, but the manufacturing process is slow and expensive. Manufacturers naturally pass those costs on to players.

Also, note that the golf balls on our list all carry some letter or other to signify their harder compression values. Being harder, their cores are more difficult to compress. The best golf balls for 100 mph swings will all be high compression. The typical tour balls are tuned more for than 90 mph swings.

TaylorMade has been innovating new solutions in golf tech since it unveiled the first-ever metal driver. The TaylorMade TP5x is just another step in the evolution of the company’s golf ball line as well as its philosophy.

The TP5x is composed of five layers. These layers increase in stiffness at each step, so the ball stores more energy the harder you hit it. TaylorMade designed the TP5x with a firmer core, but it is the snappy HFM mantle layer that makes it the best golf ball for a 100 mph swing.

Slower swings with the scoring clubs are met with a soft feel, which is made softer thanks to a buttery slick urethane cover. It is more durable than some of its competitors, making the occasional one-ball round a possibility. 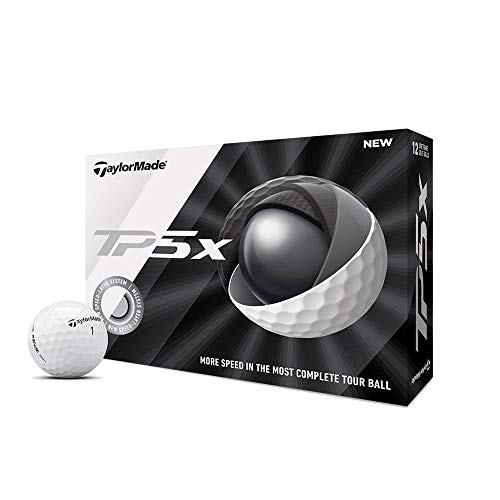 Directly beneath the cover, TaylorMade utilizes a proprietary polymer it calls high-flex material (HFM). The point of the HFM layer is to store energy, which it does thanks to being both thin and stiff. If this sounds clicky, it isn’t. The sound and feel are similar to previous TaylorMade tour balls.

Mantle Layers Give a Progressive Feel

Thanks to their increasing levels of stiffness, the mantle layers on the TP5x deform differently at varying swing speeds. There is more jump off the face the faster you swing. However, the difference is so progressive that it is imperceptible.

Flies Straighter, Especially in the Wind

Thanks to the low-drag design of the dimples and the slick cover, the TP5x is not as susceptible to wind as some of its tour-level competition. The high flight is a result of a slightly higher trajectory, not because of backspin. It pierces through headwinds and flies straighter in crosswinds.

The TP5x’s main competition is surely the Titleist Pro V1x, which spins considerably more than does the TaylorMade. The way that TaylorMade levels the green here is to use a slightly higher ball flight. So, the ball comes into the green at a steeper angle, which hopefully negates the spin disadvantage.

The three-piece Bridgestone Tour B XS features a firm gradational core, which gets firmer the more you compress it. The urethane cover is a technological master class. Dual dimples provide ideal aerodynamics for longer flight and a piercing trajectory. Those dimples are seamless as well.

Here we feature the 2021 version of the Tour B XS, which itself was a big hit for some. Still others pined for the older version of Bridgestone’s tour ball, the B330. Now, with a newer Tour B XS on the market, this version could be the one golfers reminisce over. 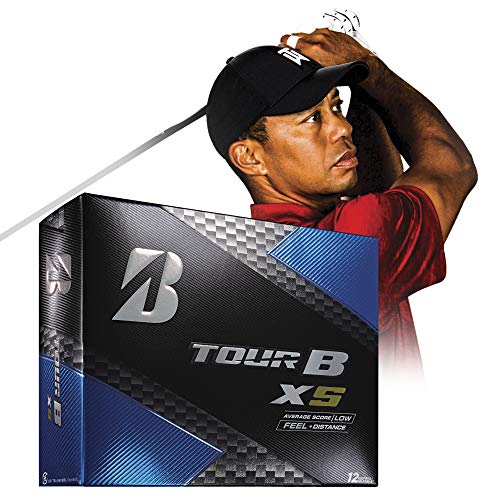 When one attribute provides of any piece of equipment provides the two most sought-after attributes in the game, you should take notice. The gradational core in the Bridgestone Tour B XS is firmer toward the middle than to the edges.

Pure it, and you’re rewarded with impressive, explosive distance. Glancing blows fail to compress the core quite as much, resulting in significantly less sidespin than would otherwise result. Longer and straighter, that’s quite a trick.

The SlipRes urethane cover on the Bridgestone Tour B XS is durable and soft, so it won’t cut as soon as some other urethane covers might. However, the technology doesn’t stop there. It’s dimple-in-dimple design cuts through the air, leading to an ideal, boring ball flight.

Thanks to the Seamless Cover Technology, Bridgestone Tour B XS covers have no discernible seam. Some other balls have a noticeable seam along one axis of the ball’s cover. The reason to avoid is that the seam may conceivably disrupt airflow and curve the ball unpredictably, a bit like the seams on a baseball do.

Coming in second place on this list is not a slight. The Bridgestone Tour B XS is a direct competitor of our top pick in terms of distance and performance. Bridgestone made major changes to the model in 2020. But the previous edition is therefore more affordable, and still readily available.

You’ve got your 100 mph swings and you’ve got your long-drive-championship swings. If your 100 mph is hovering closer to 99 mph, give the Callaway Chrome Soft X a try. Don’t let the “Soft” part dissuade you. This lower-compression ball can still take the heat.

The Chrome Soft X features a dual-density core, which compresses easier on slower swings but resists deforming on faster swings for more distance and straighter flight. The lower-compression core works with the soft mantle and buttery urethane cover to produce the softest feel in a tour ball. 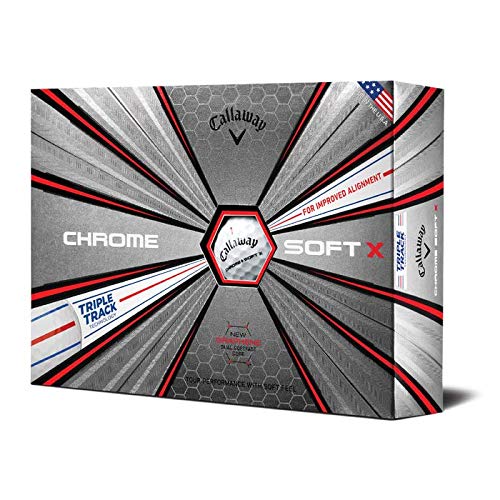 The Callaway Chrome Soft X has the softest feel of any ball we compare here. The softer mantle and cover give it a pliable feel on greenside shots. It’s almost too soft for some, leading to a distinct lack of feedback, whether harsh or otherwise.

It might seem simple, or even silly, but the blue and red Triple Track lines on these golf balls are excellent alignment aids. The width is perfect for visualizing a line through the ball to the hole, and the colors contrast strikingly without being a distraction.

Drawback – Too Soft for Some

It might seem an odd selection for this list, having as it does it more moderately firm core, but this is Callaway’s offering to the fast swingers. Anyone cranking out 105 mph or faster will likely blow up the core on these balls though, leading to inconsistent results as the ball splats on the face. At 99 mph or so, you won’t feel a thing.

The reason this ball ranks near the bottom of this list has nothing to do with its reputation as an expensive golf ball. The Pro V1 and Pro V1x are a dominant force on pro tours around the world for a reason. Titleist designed the Pro V1 more for a 90 mph swing. The Titleist Pro V1x is for faster swings.

Recently updated, the Pro V1x now features a thinner urethane cover – still the spinniest in the business. A larger mantle casing layer gives the ball more distance than it’s ever had before. A new core reduces spin on the longer clubs while allowing the cover to impart spin through friction on scoring shots. 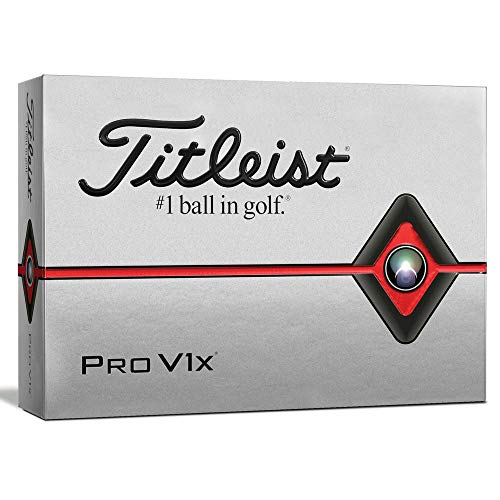 The Titleist Pro V1x spins more than most of its competitors. Shots with short irons tend to stop quicker thanks to the backspin. Players who like to work the ball may find they can bend a Pro V1x easier than the other balls on this list as well.

Longer, but Not Long

It has earned its reputation for workability and spin on the green, but the Pro V1 series (both balls) have always lacked in distance compared to other tour balls. The longest hitters don’t need to worry about that much, but one less club into a green is a big deal to us mortals.

Spins Too Much for Some

While the extra spin from the Pro V1x is a net positive for approach shots, it can be problematic with the longer clubs. Any side spin results in a noticeable slide in that direction. Slices go more offline, and hooks can be absolutely brutal. Again, the twin blades of a faster swing.

You Knew This Wa$ Coming

It’s the 500-pound gorilla in the room. You can’t discuss the Titleist Pro V1x and not mention its reputation for expense. When you compare it to its competition though, these aren’t ridiculously expensive. And for some players, they are worth it.

For the low handicapper, lost golf balls are not that big of an issue. Many retire a ball for damage long before they lose it. So paying a bit more and getting performance out of the deal may be worth it. This may be the best ball for 100 mph swings, if those swings are from better players who like to work the ball.

It may seem unfair to some that there are no more-affordable options in this space. Faster swingers have a distinct advantage on the course though, so no one’s going to cry when they pay the price for it in the pro shop. Besides, one of the keys to the modern game is swing speed. Tour balls should be a natural choice.

Our top pick, TaylorMade’s TP5x, is one of the best golf balls for 100 mph swing speed that any company has ever made. Its five progressive layers and gradational core give it blistering speed, but it still feels syrupy smooth thanks mainly to its high-tech urethane cover.

Really though, you can’t go wrong with any ball on this list. For one reason or another, certain golfers will prefer one of our runners up to our top pick, and that’s okay. The only way to know which is right for you is to experiment. Just don’t fall in love. The manufacturers change their golf ball formulas regularly, so these are just a snapshot of this time. But what a time.