Aging isn’t easy, but luckily it is gradual. As we age, golfers inevitably begin to shed a few miles per hour in swing speed. That doesn’t mean we have to suffer with poor scores, though. If we choose the right equipment, aging golfers can maintain our handicaps.

Making the change to graphite shafts in the irons can help alleviate the effects of a slowing swing. Softening the shafts we choose in the longer clubs can keep swing speeds respectable. But the easiest change we can make is moving to a lower compression golf ball.

Our top pick for the best golf ball for seniors with slow swing speeds is the Bridgestone E12 Soft. It works well for the largest variety of seniors, though some of our other choices may be better for certain players or in specific situations.

Unlike most of its competitors, Bridgestone did not take its tour ball (the TOUR B series) and attempt to retrofit it for the average player. Rather, it had the average player in mind from the beginning of the e12 engineering process.

Like its e12 Distance sibling, the Bridgestone e12 Soft is the descendent of the venerable e-series balls of the last decade – in this case the e6 Soft. It is a three-piece ball, with a pillowy 50-compression core coupled with an inventive gradational mantle layer. The synthetic Surlyn cover is slippery and tough, able to last through a round of hard use. 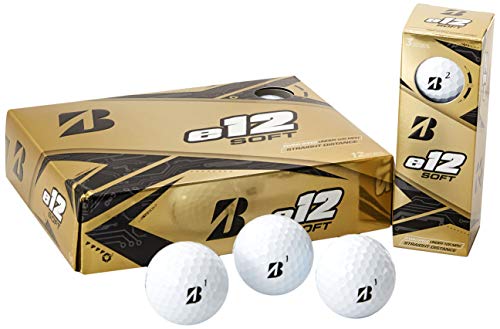 This is the major draw to the e12, and it is one that makes it worth at least considering putting it play if your swing is anywhere south of 100 mph. The mantle layer, which Bridgestone calls its Active Acceleration Mantle, snaps back into shape quicker the harder it is struck.

The mantle therefore allows Bridgestone to use a softer (50-compression) core than it could otherwise. Feel is softer for a wider variety of swing speeds, though perhaps not as high as the 105 mph that Bridgestone suggests. It is the way that the mantle works with that core that leads to the rare combination of feel and distance.

Benefit – Surlyn Cover is Nigh Indestructible

Players balls normally have urethane covers, while cheaper balls tend to use Surlyn, which is synthetic polymer. Surlyn lacks the feel of urethane because it is harder, which also means the grooves on a clubface cannot bite into it like they can urethane (also reducing backspin).

To its credit, though, Surlyn brings a lot to the table. It is far tougher than urethane, so scuffs are less likely to prematurely end the ball’s life. Surlyn also slices through the air better, so it tends to go a little farther. Finally, being a bit cheaper, it doesn’t hurt so bad when it finds a watery grave.

There is a lot to be said for a ball that only goes straight, especially for players who tend to slice it. The engineers at Bridgestone built this ball to do one thing: fly like an arrow. The dimple pattern, cover material and cushy core all conspire to help you find the center stripe.

While down the middle is perfect on straight holes, it can be a detriment on a dogleg. It also won’t help you work the ball toward the hole on a par 3 or escape from jail if your alignment is off enough to send the ball into the woods. For the most part, going straight is a positive – until it isn’t.

Is there a market for a tour-level, low-compression golf ball? Titleist thinks there is. The Titleist AVX is a legit tour ball in most areas. Urethane cover? Check. Multiple layers? Check. At first strike, it would be hard to tell the difference between the AVX and a Pro V1.

But the AVX has a much softer core than the Pro V1. It also has a lower compression – 80 versus the Pro V1’s 90. The dimples are shallower for less drag, creating a boring trajectory. Like the e12, the mantle layer brings up the compression of the soft core. 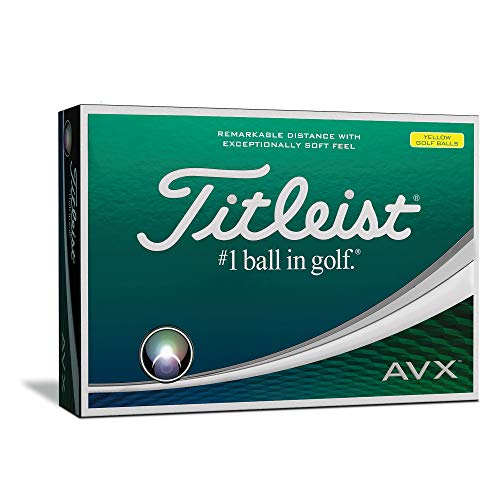 The AVX’s GRN41 cover is a new urethane formulation for Titleist. It is softer yet more resilient than the cover on the company’s tour balls. This urethane allows the grooves on the scoring clubs to grip it for more spin, but the grooves on the longer clubs cannot bite into it.

The result is lower spin on the long irons, hybrids and fairway metals. That lower spin equates to more control, as sidespin is also reduced. Less backspin means less distance lost to ballooning – a common problem for low-compression balls.

The snappy mantle is becoming quite the theme for low-compression balls. The older way of doing it was to use a soft core and a thick cover. The three-piece ball is a much more elegant solution to giving slow swingers some added distance.

The only thing players with slower swings really need to consider here is cost. The e12 soft is comparable to the AVX in most respects. The AVX flies lower, which is good if you tend to balloon it or if you play along the ground. The e12 works better for very slow swings, but both are wonderful for slow-to-average swings.

Otherwise, only the AVX’s urethane cover separate the two. Urethane has better feel than synthetic, but is worth paying roughly double?

Callaway’s Supersoft achieved cult-like status in its original form, but this new version improves upon its predecessor. The cover is now a softer Trionomer synthetic, which has a lower compression than the previous version. The new Hex dimples do a better job of reducing drag.

As was the case with the previous Supersoft, everything adds up to an ultra-low compression and a reliably straight ball flight. If it flew as high or worked for as broad a range of players, the new Supersoft might have beaten the e12 for top pick.

As it stands, the Supersoft is targeted specifically at players with the slowest swing speeds. For those players, this remains an inspired and inspiring ball. It has few competitors in terms of softness, and among those it is clearly one of the best. 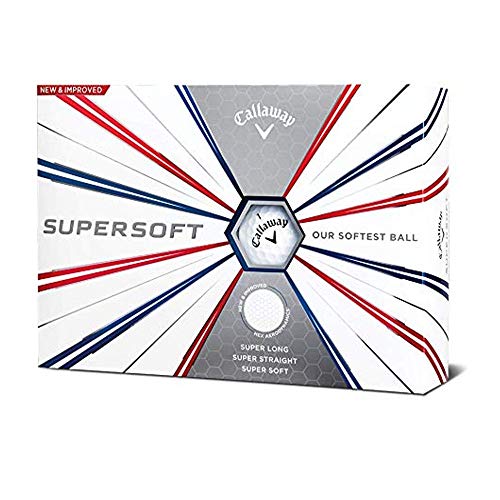 The Callaway Supersoft has a well-deserved reputation among senior golfers. Its 35-compression core provides pop that has kept many of these players off the forward tees. For players with driver swings in the mid-80s or below, few balls can compete with a Supersoft.

The original Callaway Supersoft was already a straight flier. However, with the new dimple pattern (borrowed from the company’s tour balls), the Supersoft is even straighter and longer. The key to achieving both of these things is to reduce drag, and the low-profile Hex dimple does just that.

Drawback – Only for the Slowest Swings

If your swing touches 85 mph, you should probably think twice before putting a Supersoft in play. Unlike the e12, Callaway has no technology in place to mediate the effect of a harder strike. For faster (average) swing speeds, the ball sticks to the face too long, eliminating the snap back that leads to distance.

Wilson Staff’s 50 Elite is a better option than the company’s Duo ball. Many slow swingers mistakenly think they need the lowest compression possible, but the Duo’s 35 compression is too low for all but the very slowest swings. The 50 Elite (50 compression, get it?) will work better for most seniors.

The Wilson Staff 50 Elite is bargain-priced ball, but it isn’t a slouch. It utilizes the large-core/thick-cover approach familiar to most slow swingers. There’s nothing earth-shattering going on here. It’s just a basic ball that works fine for a fair price. Like a cup of coffee – black, thank you. 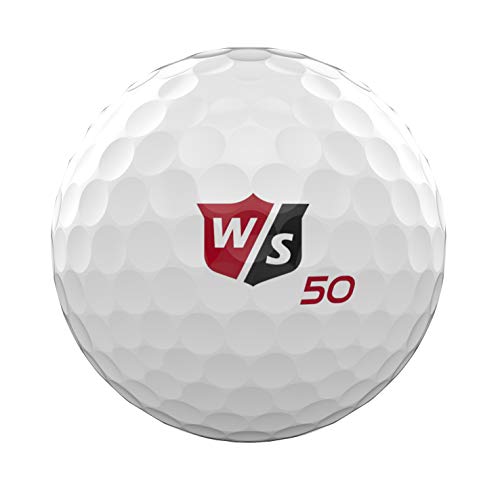 It may not be the most technologically advanced golf ball on the planet, but the Wilson 50 Elite is just right for many players. Slow swings pop it out there pretty decently, and it shrugs off trees and cart paths. And if you drown a few, who cares. These are balls that abide a tight budget.

Whether it be the thick synthetic cover or the lack of a mantle layer, the 50 Elite just doesn’t feel sharp from close range. It is living proof that soft does not equal feel. There is a clicky abruptness to short-game shots that belies the compression rating.

Drawback – Too Squishy for Some

There is a small range of swing speeds that the 50 Elite will accommodate. Average swing speeds blow it up, while very slow swings can’t compress it. The good news is, for the price, it’s worth trying a box. If they don’t work for you, save them for winter temperatures and water holes.

Compression, in golf ball terms, refers to the amount of force required to fully compress the golf ball. Tour balls are normally around 90 to 100 compression. To completely compress one of these golf balls, a player must swing (the driver) north of 100 miles per hour.

Players with swings in the 95-mph range may get away with playing a 90-compression tour ball, but that’s pushing things. If they can’t compress the ball, it will feel harsh and rock-like. It also won’t go very far. Those players need to seek out a ball that’s a bit easier to compress.

Golf balls are considered low compression when the number gets below 70 or so, but these things are often relative. Manufacturers also do not always give out their compression numbers, so players are left to rely on terms like soft or feel to put it all together.

When a player uses a ball that is too low in compression rating, it will deform too fast during the strike. Then, it cannot rebound fast enough. The result will normally be a mushy feel and a noticeable lack of distance. Our winner is soft enough for most players, but it doesn’t take it too far.

Saying the Bridgestone e12 Soft is a better ball than the Titleist AVX is a stretch, and that’s not what we’re doing. If you have an average, 90 mph swing and the dough, the AVX is likely the better option. For everyone else, the e12 Soft just makes more sense.

The other options on this list have their places as well. What makes the Bridgestone e12 our top pick is that it works great for the widest variety of swing speeds and budgets. It is the modern way to wring more distance from a slower swing, which just may help a senior player keep those front tees out of play for another season or two.